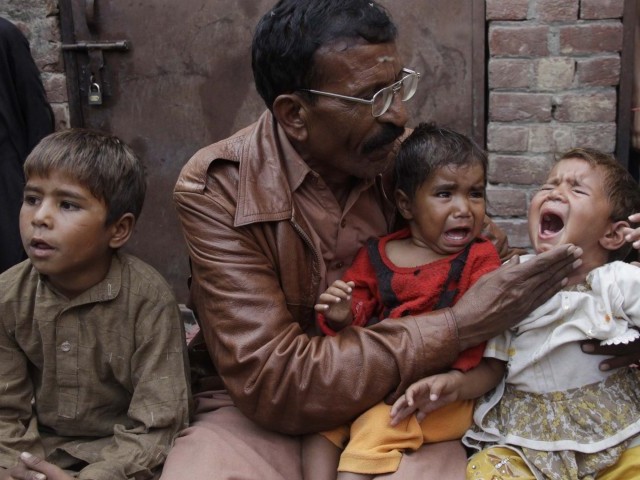 LAHORE: Punjab Chief Minister Shahbaz Sharif on Thursday visited the family of the deceased Christian couple and announced a compensation of Rs5 million and 10 acres of land for the family, Express News reported.

Watch the video of Shahbaz’s visit below:

Earlier, as civil society and human rights organisations continue protesting against the killing of a Christian couple accused of blasphemy, Prime Minister Nawaz Sharif and Punjab Chief Minister Shahbaz Sharif vowed to punish those behind the heinous crime.

On November 4, an enraged mob beat a Christian man and his pregnant wife to death and then burnt their bodies in the brick kiln where they worked for allegedly desecrating the Holy Quran.

The premier, who is chairing a cabinet meeting in Islamabad, said the culprits will be brought to book. Federal ministers attending the meeting also condemned the attack.

While in Lahore, CM Shahbaz met the inspector general Punjab and other law enforcement agencies officials and reiterated that strict action will be taken against the perpetrators.

The chief minister was informed that an anti-terrorism court has already begun hearing cases against the arrested suspects.

He was also told that police have recorded the statement of Yousuf Gujjar – owner of the kiln where the couple was burnt.