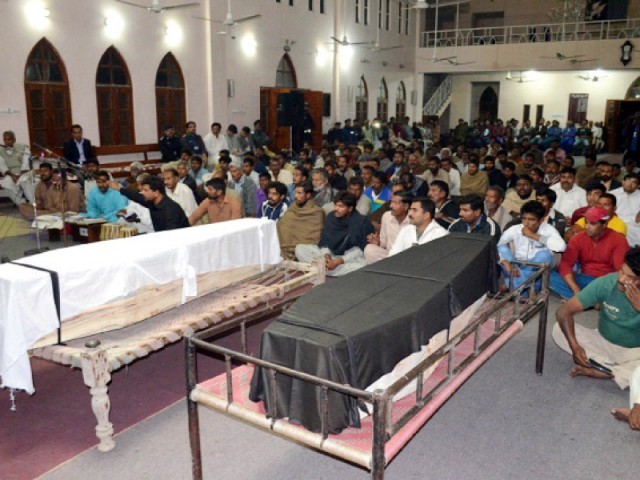 Christian community members gather at a local church at Kot Radha Kishan where the coffins are placed. PHOTO: SHAFIQ MALIK/EXPRESS

Members of the civil society and representatives of the Christian community on Wednesday condemned the killing of a Christian couple accused of blasphemy on Tuesday in Kot Radha Kishan in Kasur.

The Human Rights Commission of Pakistan (HRCP) expressed grave concern over the incident in a statement issued on Wednesday.  The statement was based on the preliminary findings of a fact finding team that had visited the area. The commission said the team had found no evidence of the alleged desecration of Holy Quran. The HRCP said the incident appeared to be rooted in a dispute over wages and outstanding payments. Shehzad, one of the victims, had been asked by the kiln owner to repay the advance he had extended to the families of two Muslim labourers. The owner had asked him to repay the amount as Shehzad had introduced the men to him.

The commission said it appeared that Shehzad and his expectant wife, Salma, were locked up in a room after being beaten up at the kiln. Some bystanders said Shehzad had died while being thrashed. The HRCP said hundreds of people had started moving towards the kiln as word of the alleged desecration spread through loudspeakers mounted at mosques. The commission said four policemen had visited the scene and demanded the custody of the couple. The HRCP said the owner had instructed his employees to refuse to cede to the police’s request. The commission said the policemen were also beaten up.

The HRCP said it was still waiting for the police’s version. The district police officer told the commission that the incident was being probed and police had arrested 40 people including the kiln owner.  The HRCP said the incident represented the vanishing writ of the statement as the policemen were unable to secure the couple’s custody.

The commission also demanded swift action to be taken against those guilty of instigating violence against the victims and preventing their rescue from the kiln. The HRCP also drew attention to the plight of kiln workers and demanded an end to such practices that continue to flourish despite constitutional safeguards.

Special prayers for the deceased and national prosperity and integrity were also offered on the occasion at the Bishop House Catholic Church.

Those present on the occasion urged the government to impartially probe the incident and punish those held responsible for it.

They also urged the government to ensure the life and property of Christians and other minorities in Pakistan. The participants said this was necessary to promote communal goodwill and harmony in society.

National Commission for Justice and Peace Director Father Symon Khurshid demanded that the government take notice of the incident.

He also urged the government to ensure that the rights and privileges of minorities were safeguarded in accordance with a verdict of former chief justice of Pakistan Tassaduq Hussain Jillani.