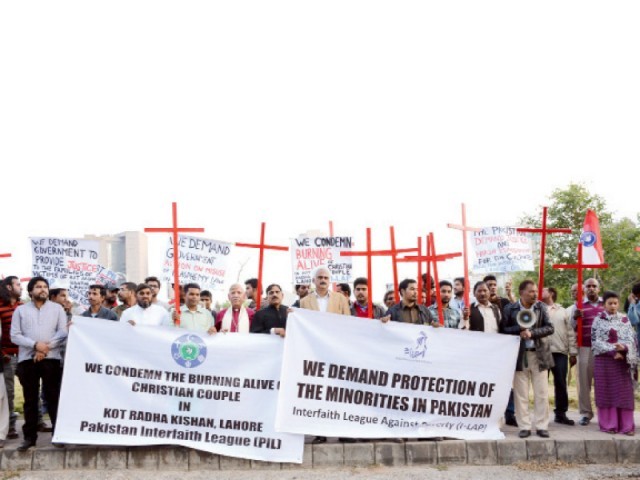 Members of civil society and the Christian community gathered outside National Press Club on Wednesday to register their protest against murder of a Christian couple on Tuesday in Kot Radha Kishan near Lahore.

The participants were chanting slogans against the zealots and the government’s apathy towards minorities, flashing placards towards indifferent bystanders that glided right past the protesters. They demanded justice for the victims’ family and action against the perpetrators of the gruesome act.

“It is not the first time we have been targeted. We have seen several such incidents against minorities in the past,” Interfaith League against Poverty (ILAP) Chairman Sajid Ishaq said.

“We do not see any hope, even this time around,” he added. Ishaq said that the incident was a test case for the government’s seriousness towards minorities’ rights.

The government must set up an independent judicial commission to probe the incident and make its findings public at the earliest, he demanded.

On the blasphemy law, Ishaq said, the problem was the mindset in society not the law. Clerics incite people and encourage them towards such acts, he said.

Pakistan Interfaith League Executive Director Nazia Ansari said criminals were getting away with such acts because of weak prosecution and enforcement of law. She said if we look at previous cases of similar nature, nothing has been done till date.

Human rights activist Farzana Bari said that violence against minorities were on the rise and people were now encouraged to commit such acts with impunity.

She said parliament must review the blasphemy law as it is constantly misused.

“Once someone is even accused of blasphemy, they are doomed,” she said. She said special courts must be established to curtail such crimes.

She said that due to an increase in such incidents, a large number of non-Muslim Pakistanis were migrating abroad. “The sense of insecurity is on the rise. Those left behind are the ones who cannot afford to leave,” she said.

Separately, Father Emmanuel Yousaf and Cecil Shane Chaudhry of the National Commission for Justice and Peace said in a joint statement that increasing incidents of intolerance and violence against religious minorities speak volumes about the protection provided by the government to non-Muslim Pakistanis. Criticising the repeated failures, they demanded serious attention to the issue and said that because perpetrators of such incidents are never brought to justice due to lack of political will, minorities remain vulnerable as ‘soft targets’.

According to findings of the European Organisation on Pakistani Minorities released earlier this year,  events of violence against minorities in terms of target killings, sectarian killings, torching of holy books and temples, rape, murder, forced conversion and abductions have affected up to 150 Shias, 45 Hindus, 21 Sikhs, 66 Christians, 22 Ahmadis and 13 others.