Shahba­z Sharif has consti­tuted a three-member commit­tee to fast track the invest­igatio­n of the killin­gs
By AFP
Published: November 4, 2014
Tweet Email 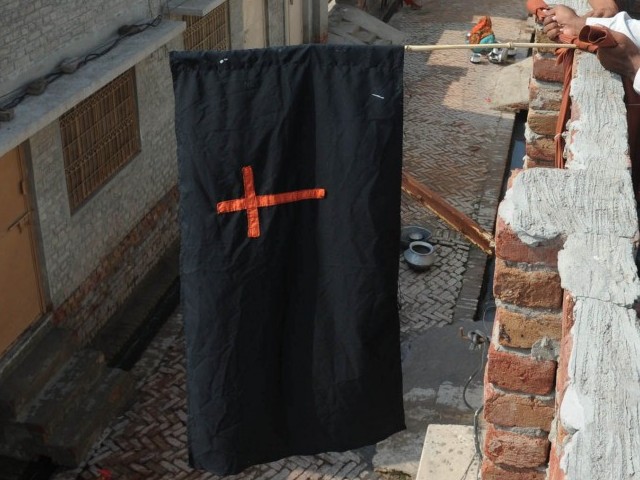 A Pakistani Christian resident hangs a flag with the cross symbol at his home in Korian on August 30, 2012. PHOTO: AFP

LAHORE: An enraged Muslim mob beat a Christian couple to death near Lahore and burnt their bodies in the brick kiln where they worked on Tuesday for allegedly desecrating the Holy Quran, police said.

The incident took place at the town of Kot Radha Kishan, some 60 kilometres (40 miles) of Lahore, and is the latest example of mob violence against minorities accused of blasphemy.

“A mob attacked a Christian couple after accusing them of desecration of the Holy Quran and later burnt their bodies at a brick kiln where they worked,” local police station official Bin-Yameen told AFP.

“Yesterday an incident of desecration of the Holy Quran took place in the area and today the mob first beat the couple and later set their bodies on fire at a brick kiln,” he added.

Another police official confirmed the incident. The victims were only identified by their first names, Shama and Shehzad, and were a married couple.

Pakistan’s brick kiln workers are often subject to harsh practices, with a study by the Bonded Labour Liberation Front Pakistan estimating that 4.5 million are indentured labourers.

Punjab Chief Minister Shahbaz Sharif has constituted a three-member committee to fast track the investigation of the killings and ordered police to beef up security at Christian neighbourhoods in the province, an official from his media office told AFP.

Blasphemy is a sensitive issue in Pakistan, with allegations often prompting mob violence.

A Christian woman has been on death row since November 2010 after she was found guilty of making derogatory remarks about the Prophet Mohammed (PBUH) during an argument with a Muslim woman.