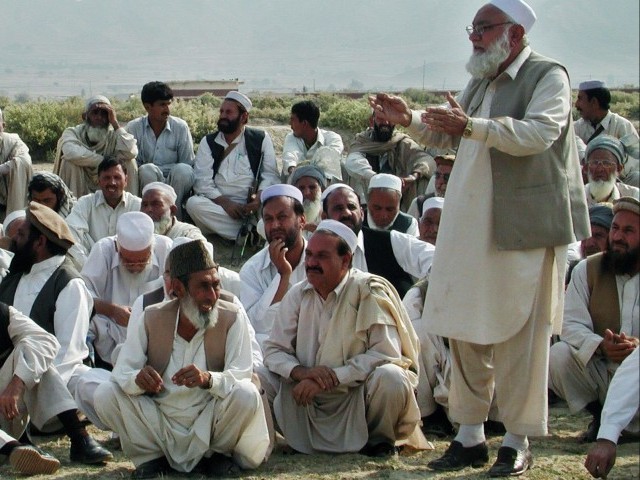 A file photo of a tribal jirga. PHOTO: AFP

A day after an 11-member Jirga of the Mehsud tribe met with commanders of a splinter group of the Tehreek-e-Taliban Pakistan (TTP) at an undisclosed location, a member of the Jirga said that since the government has reposed trust in them they would do their best to restore durable peace in the volatile Waziristan region.

“If the government had involved Mehsud tribe elders earlier, we would have helped in easing the suffering of our tribe,” the Jirga elder told The Express Tribune requesting anonymity. “Still it’s a welcome sign that the government now trusts us – and we will play our role to restore peace to our region.”

He added that tens of thousands of Mehsud tribesmen had been uprooted from their homes as a result of the 2009 military operation Rah-e-Nejat in South Waziristan Agency. These displaced tribesmen – officially designated as internally displaced persons, or IDPs – live a miserable life in different parts of the country, the elder said. “Our initiative is aimed at restoring peace in the region and early repatriation of the Mehsud IDPs to their homes.”

On Sunday, the 11-member Jirga met with top commanders of the TTP Sajna Group, including its chief Khalid Khan, alias Khan Said Sajna, at an undisclosed location. Ikramudin, the father-in-law of slain TTP founder Baitullah Mehsud, heads the Jirga which comprises prominent elders of the Mehsud tribe. The Jirga will now meet government officials and brief them about the outcome of their meeting with the Sajna Group commanders.

Reportedly, the Jirga will also meet other Mehsud factions of the Taliban, including TTP-Sheheryar Group, but there is no clarity on this yet.

The peace initiative was set in motion when a Waziristan tribal Jirga met the corps commander at his office in Peshawar a few weeks ago. It is perhaps the first time tribal elders have been involved in the negotiation process – and it is hoped that their involvement would lead to fruitful dialogue with the militants.

Also, Sajna Group is said to be amenable to talks as he had broken off with the Mehsud faction over the issue of talks with the government.