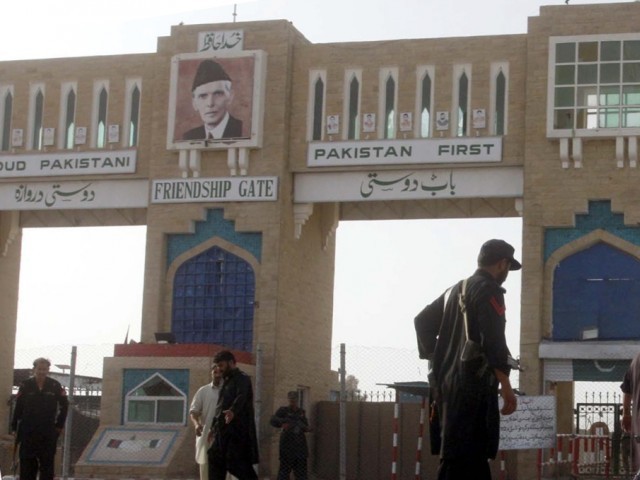 A file photo of the Pak-Afghan border. PHOTO: PPI

ISLAMABAD: In light of the withdrawal of Nato forces from Afghanistan, a parliamentary panel has underlined the need for a firm policy of Pakistan’s relations with Afghanistan instead of a knee-jerk reaction and the need to secure the Durand line.

The proposals were floated by Senate Standing Committee on Foreign Affairs after a public hearing over the subject in which experts and citizens gave their input. Their report was submitted to the Senate last week.

The other proposals agreed upon with consensus included, “being prepared in advance for possible repercussions and effects of the Nato pull out, addressing needs and grievances of the people of Fata, a neutral foreign policy regarding Afghanistan, dire need for internal reconciliation in Afghanistan and Pakistan, Pakistan facilitating reconciliation talks in Afghanistan when and if asked to do so, all regional communities must be involved for peace in the region and the need for civil and military coordination.”

Chairman of the committee Haji Adeel said that currently there were 3.7 million Afghan refugees in various cities of Pakistan and withdrawal of Nato forces from Afghanistan was a critical turning point in history.

“If there is peace in Afghanistan after the Nato withdrawal, the Afghan immigrants may be asked to return to their native country,” he said, adding, “However, if after the withdrawal of Nato troops the Afghan warlords act up, then we can expect a greater influx of immigrants.”

The chairman recognised the loss of lives, infrastructure and the impact on peace as a result of terrorism as alarming and claimed that 5,000 schools have been destroyed in Khyber-Pakhtunkhwa.

Regarding fencing and border management of Pak-Afghan porous border, Asfandyar Khan proposed that Afghanistan must accept the Durand line as an international border.

“In this regard, the government of Pakistan should spend a wholesome budget on border fencing and setting up maximum possible check-posts and policed border crossings,” Asfandyar Khan maintained.

“Monitoring the people crossing the Durand line, Afghanistan will also benefit from fencing of international border. Militants will possibly find it difficult to cross into Pakistan and vice-versa,” he added.

He said that the use of biometric system on Durand line has been opposed by Afghans.

During the hearing, former Director General Inter Services Intelligence defended the Pak-Afghan policy during the 80s against the USSR.

“Pakistan had an option to remain silent, but whatever it did was in the better interest of the country as the region was under war and Pakistan could not remain a neutral party in such a situation. Every policy was based on good intention and its results could be different,” the former DG ISI said.

Further, former ambassador Dr Maleeha Lodhi pointed out that, “Pakistan should carefully assess what might happen across its western border and promptly take appropriate actions.”

Lodhi said that Pakistan failed to take these steps 25 years back, when the Russians were withdrawing from Afghanistan, leaving Pakistan unprepared to deal with the situation.

“Strategically we need to secure our country’s borders. We need to protect ourselves. We need to take a sovereign decision and move on and not play the victim narrative. We can promote Pakistan’s internal security through the rule of law and writ of the state,” she added.