Bloody Sunday: Carnage on the border

Bloody Sunday: Carnage on the border 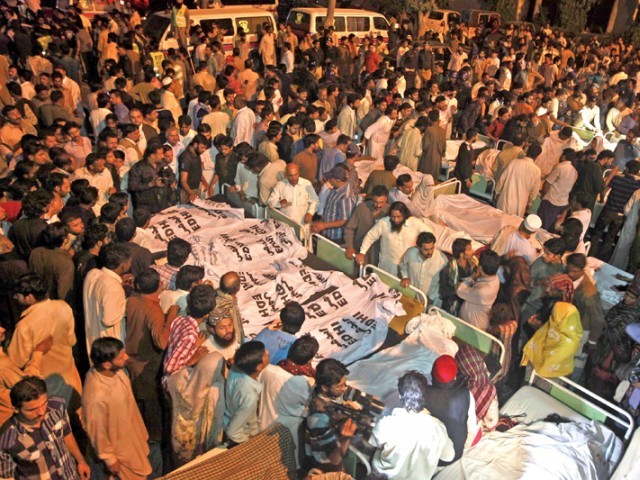 Relatives gather around the bodies of blast victims after a suicide bomb attack near the Wagah border. PHOTO: AFP

At least 55 people, nearly half of them women and children, were killed and dozens wounded when a suicide bomber struck near the Wagah border crossing between Pakistan and India just after a ritual flag-lowering ceremony Sunday evening.

The well-choreographed event is a display of military pageantry that attracts thousands of spectators every day and is popular with foreign tourists. Huge crowds gather on both sides at Wagah each sunset to see the ceremony that accompanies the formal closing of the border post. He said that people have to cross walkthrough gates at two checkpoints before reaching the parade ground. The bomber detonated the explosives strapped to his body when people were exiting the second checkpoint, nearly 500 metres from the parade ground, he added.

“This means the bomber couldn’t breach the security cordon,” Maj Gen Khan said, adding that the death toll could have been higher if the bomber had managed to reach the parade ground. “Three Rangers personnel also embraced martyrdom and five received shrapnel wounds in the attack,” he added.

Maj Gen Khan said the bomber struck near where tea and food stalls and canteens are located. Moreover, a National Logistic Cells (NLC) yard is also sited nearby where hundreds of labourers work. And they come to these stalls for lunch and dinner.

The casualties were shifted to Gurki Hospital, where distressed relatives, weeping and hugging each other in grief, searched for their loved ones. Later some of the dead and injured were moved to Mayo Hospital and Services Hospital both of which declared a state of emergency soon after.

“We were here to watch the parade and the blast took place, the moment we left the venue,” Muhammad Imran, 12, said as he looked for his three brothers at the hospital. Two sisters, Kalsoom and Sumera, said they were visiting a nearby jewelry stall after the ceremony when the deafening explosion occurred. “A thick cloud of dust and smoke covered the whole area. We recovered from shock, we were shifted to hospital,” they said.

IGP Punjab Mustaq Sukhera said that the bomber’s vest was rigged with 12-15 kilos of explosives. Ball bearings and nails were also packed in the device with the intent to inflict maximum casualties, he added. IGP Sukhera said that the arms and legs of the bomber have been found and subsequently sent to a forensic lab for a DNA test.

According to sources, the police suspected that the suicide vest could have been transported to the area in a truck bound for the NLC yard. The bomber might have reached the area unsuspected, collected the vest and struck, sources said. However, the police said they are also investigating other possible angles.

Intelligence agencies had shared information with the police about a possible attack, but it was taken as a routine matter, sources said, adding that the provincial police was preoccupied with the security arrangements for Muharram mourning processions and the bomber took advantage of that.

Ashok Kumar, the inspector general of India’s Border Security Force guarding the Wagah border crossing, said that no one from his force was injured. “Our side is safe. We are alert, have increased our security, we are in constant touch with district officials and state police,” he said.

Any explosion on the India-Pakistan border is far more serious than a similar event on the Pakistan-Afghan border, another Indian security official said. To mourn the victims, the flag-lowering ceremony will be held with simplicity for three days and visitors will not be allowed to attend.

Sadiqul Farooq, the chairman of the Evacuee Trust Property Board, told reporters at the site that the bombing was a blowback of the ongoing Operation Zarb-e-Azb in North Waziristan.

However, he assured Sikh pilgrims coming to Lahore over the next two days from India that there was no need to panic as fool-proof security arrangements were in place for their annual pilgrimage. “Around 2,000 Sikh yatri will be arriving by train, 1,500 by air and 15,000 local yatris would attend the pilgrimage,” he added.

There were several conflicting claims of responsibility for the attack, reflecting the fragmentation the Tehreek-e-Taliban Pakistan (TTP) has undergone in recent weeks.

Abdullah Bahar, a spokesman for a TTP faction loyal to its dead chief Hakimullah Mehsud, said they carried it out to avenge Mehsud’s killing in a US drone strike last year. But the Jamaat-ul-Ahrar faction, which broke away from the main TTP leadership in September, rubbished the claim and said they were behind the blast.

Group spokesman Ehsanullah Ehsan said in an email statement the attack was revenge for those killed in the North Waziristan military operation. Ehsan said they would soon release video footage of the attack. TV channels also ran claims from a third militant faction, called Jundullah.

Up in smoke: Survivors recount moments of horror