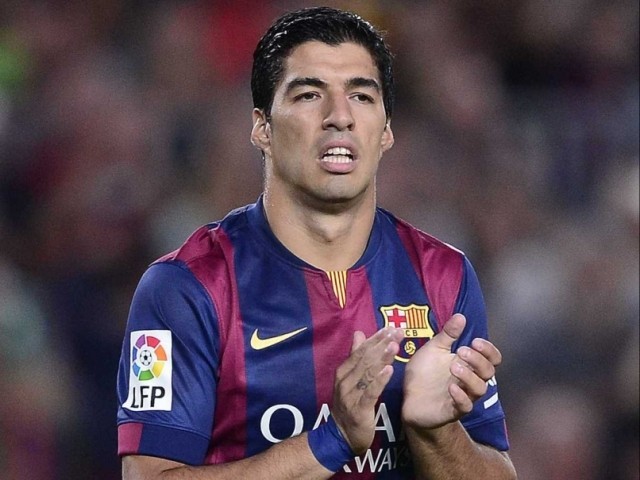 Suarez is not happy with his debut home and away with Barca. PHOTO: FILE/AFP

MADRID: Luis Suarez remains without a victory in a Barcelona shirt as the Catalans suffered a shock 1-0 defeat to Celta Vigo on his home debut on Saturday.

Barca had been unbeaten in the league until the Uruguayan’s bow away to Real Madrid last weekend, but consecutive defeats have seen them slip to third in La Liga behind Real and Atletico Madrid.

Luis Enrique’s star-studded frontline of Suarez, Neymar and Lionel Messi were left frustrated as the hosts struck the woodwork four times and were denied by Celta keeper Sergio Alvarez on numerous occasions as Joaquin Larrivey’s second-half strike sealed the Galicians first away victory over Barca since 1941.

“To return to playing against Real Madrid was a bittersweet feeling, it was great to be back but we didn’t get the result,” Suarez told Barca TV. “To make my debut in the Camp Nou in a competitive game was nice but the result is negative again.

“We created a lot of chances, but we didn’t have luck on our side. They defended well and their goalkeeper was great.

“Football can be unjust at times, the opponent creates one chance in the whole game and scores and that hurts.”

Coach Enrique also lamented his side’s lack of efficiency in front of goal and is braced for the criticism that will come the way of him and his players in the coming days.

“We had 19 shots and hit the woodwork four times,” said Enrique. “There were errors, but the attitude the team showed will reinforce us going forward.”