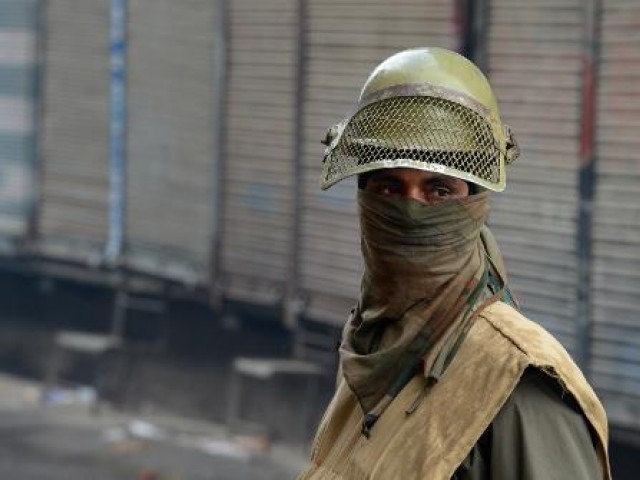 An Indian policeman stands guard in front of closed shops in Srinagar on February 11, 2014. PHOTO: AFP

Soon after the announcement of elections in Indian Kashmir, New Delhi has detained several pro-independence Kashmiri leaders in a  crackdown, BBC Urdu reported on Saturday.

All Parties Hurriyat Conference (APHC) leader Syed Ali Geelani has been put under house arrest after the announcement of elections while dozens of other leaders, including Shabbir Ahmed Shah, Yasin Malik and Naeem Khan, have been put in different prisons of the disputed stated.

“The Indian government and its allied groups want to suppress the local leadership of Kashmir. But we reject these elections and urge the people to stay away from these sham polls,” said Farooq.

To protest against the Indian government’s crackdown on pro-independence Kashmiri leaders, demonstrations were staged in various parts of Srinagar. Authorities maintain that when pro-independence leaders stage anti-government rallies, there are huge chances that violence will break out.

Kashmir police chief Rajendra Kumar said the army, police and paramilitary forces have devised a strategy to provide security to the people during the upcoming elections which will start from November 25.

Human rights organisations believe that APHC leaders and activists are being detained to pave way for a smooth election campaign for pro-India leaders. Raising concerns over these arrests, these groups said the government is fueling violence in the region by suppressing the voice of masses.

The Indian government has placed a ban on observing the Muharram rituals in Kashmir for the past 25 years and the Shia community is not allowed to carry out any mourning procession. The restriction is imposed this year as well, as clerics are barred from holding religious gatherings and processions.

Muslims are also unhappy with the government since it has barred them from taking out procession to mark the holy month of Muharram. Farooq has urged the international community to intervene in this matter.

Rights organisations have asserted that by suppressing a democratic right of the Kashmiri people, India is again trying to pave way for violence and state terrorism.

Indian Kashmir has not yet recovered from the aftermaths of this monsoon’s devastating flood that hit the Himalayan state few a month back. The damage assessment has still not completed but the government has announced elections for the 87 seats of the state legislature.