Let’s knock out bullying in schools

Let’s knock out bullying in schools

Childr­en need to know what bullyi­ng is, how they can and should deal with it and lastly why they must report it.
By Sana Batool
Published: November 24, 2010
Tweet Email 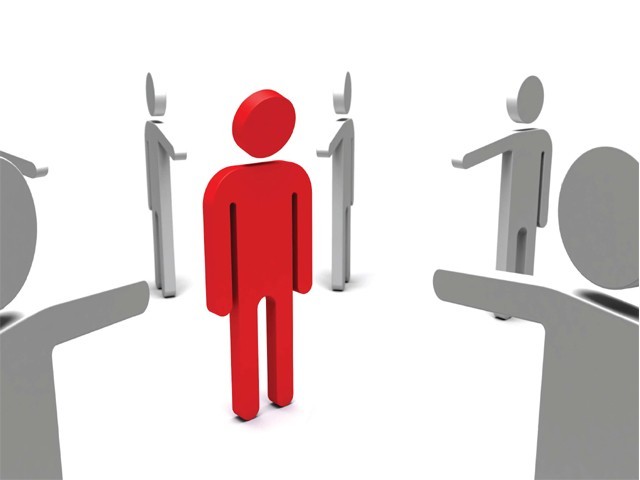 Children need to know what bullying is, how they can and should deal with it and lastly why they must report it

On November 17 the world celebrated International Students Day with many students across the world suffering from name calling, bullying and harassment in schools.

Peer victimisation and harassment has forced students to commit suicide in some cases whereas, for others, it has badly affected their career paths. In Pakistan, the cause of most of the suicides committed by young students is not documented but in the West there have been cases when students hanged themselves to death after being threatened, pushed around and humiliated by classmates.

In Pakistan the reality has been buried in layers of ignorance and has left great impact on the educational progress of the country.

Is this your child’s story too?

Raahim is a seven-year-old obese child in one of the private schools in Karachi. His mother claims to have made endless complaints to school authorities about some children who often try to bully him and make fun of him for being overweight. “They snatch his lunch box and run away, and Raahim due to his obesity can’t run after them,” says his mother.  She has observed that the school doesn’t give much attention to her complaints. “Raahim has become rebellious and arrogant and in private he likes to fight with those who bully him at school. He would kick and punch in the air! This is so disturbing,” she says with teary eyes.

Bullying can be psychologically traumatising for the child as it often results in strong feelings of fear, shame, embarrassment, guilt and poor self esteem. These feelings are encouraged by the bully to keep their target child quiet. The child may suffer from poor concentration in class or otherwise, impaired memory, and fatigue — all of which tend to work on the unconscious level within the child. The impact may be so fatal that it may even lead to various psychological problems ranging from depression, bi-polar disorder to borderline personality disorder. In some cases, suicidal tendencies have also been observed. Since the victim feels helpless and ashamed to voice out the hurt and angst, it turns inwards adopting a self-harming tendency to help ease the pain.

“Schools should have ongoing anti-bullying programmes to create awareness and highlight specific bullying behaviours that the children can self-identify and know when to seek help. Children need to know what bullying is, how they can and should deal with it (if you are a victim or a witness) and lastly why they must report about it. Role playing is an extremely effective way to help children identify specific bullying behaviours and roles,” says Farva Patel, a teacher at the Centre for Advanced Studies (CAS) School and a psychologist.

Bullying is more likely to be seen in all-boys schools and is also one of the reasons for boys’ poor educational progress relative to that of girls in Pakistan. It also seems to be linked to their casual attitudes towards education in our country. “When two boys get together they think they rule,” says Afzaal Mehmood, a teacher at a semi-private all-boys secondary school. “Their target is mostly those students who stay alone and have no friends,” he added. “Behavioural management classes should be given to all the students and teachers so that the learning environment doesn’t get disrupted by deviant behaviours.”

“When I was in school, two girls of my class regularly used to taunt me because I‘d never join them in disrupting classes. They used to call me by different names and made sure that none of my classmates be friends with me. They would tell them bad things about me and unfortunately I hated school at that time,” says Taskeen, a private university student now.

“Bullying to me is one of the antisocial behaviours that should be given tremendous importance by schools authorities. There should be awareness campaigns, behavioural development classes, councils and complaint boxes in every school to keep an eye if any child is being victimized,” says a teacher from Haque Academy School, DHA. The school is among those who have initiated a campaign against bullying. Survey activities (filling up questionnaires), additional activities such as writing in their journals, drawings/posters that can be used in class or bulletin boards on ‘Preventing bullying’ were conducted and displayed in the school.

The students presented dramas, songs or dance sequence to illustrate their stories. In assessment strategy the students were invited to share their stories or fine arts creation to find evidence of students’ expression and feelings. “Our students are now more aware of the word ‘bullying’ and its negative connotation that if you ask a junior class student in school about bullying, he will say its ‘bad’,” says Mrs Ambreen Aun Ali, Assistant Director Administration and Special Programmes, Haque Academy.

Although, some schools discourage on-campus bullying but in many don’t even recognise it as an issue. Neither heads of the school nor the teaching staff is aware of the prevalence and seriousness of the issue. If schools are an important element that helps in constructing the foundation of a child’s future then bullying at the same place wrecks the ground on which child’s behavioural and mental building stands.