Sindh govern­ment plans to build a mausol­eum for Sheedi along with a guest house
By Z Ali
Published: October 19, 2014
Tweet Email 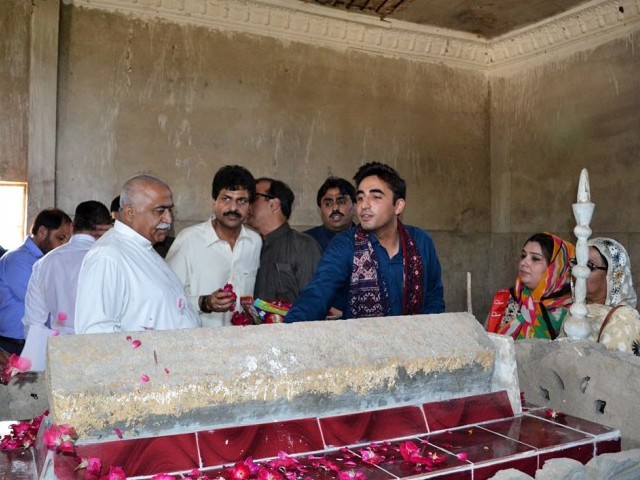 A day before the much-hyped Pakistan Peoples Party rally in Karachi, the party’s chairperson visited the grave of the 19th century Sindhi freedom fighter, Hosh Muhammad Sheedi. The visit is being seen by many as a symbolic gesture, marking the young leader’s realisation of the fight that lies ahead of him.

The sleepy village of Budho Siyal in Hyderabad was brought to the limelight on Friday after decades of oblivion, as Bilawal arrived to pay respects to Hosh Muhammad Sheedi – the Talpur army’s general, who fought against the British colonialists and laid down his life on March 24, 1843.

Bilawal is also the first leader of national stature to have visited Sheedi’s now-desolate and run-down tomb. “Today, I have come to the resting place of this great leader, Hosh Muhammad Sheedi. He was the one who threw down the gauntlet to Sindh’s enemies,” said Bilawal while talking to the media outside the tomb. “I want to tell people of Sindh about General Sheedi.”

Bilawal has often reiterated Sheedi’s slogan ‘marsoon marsoon Sindh na deson’ (we will die but will not give Sindh), particularly in response to the Muttahida Qaumi Movement’s demand for new provinces. However, the undertone of this visit is perceived not to be MQM-specific this time around.

“Marsoon marsoon Sindh na desoon. Marsoon marsoon Pakistan na desoon. I want to tell the enemies of Pakistan, Sindh, Karachi and Hyderabad that this is our Pakistan, our Sindh, our Karachi and our Hyderabad,” he shouted through the megaphone, addressing both the media and the village residents, who were confined to their homes but watched the PPP leader from their windows and roofs.

Commenting on the visit, PPP senator Maula Bux Chandio, a former journalist who belongs to Hyderabad, said Bilawal has shown that he loves Sindh and belongs to the political party of martyred leaders.

Political observers, on the other hand, view the visit in a different shade. According to Sindhi columnist, Aijaz Mangi, the gesture has a dual purpose. One is to garner support for the October 18 rally and the other, to stoke nationalist sentiment among Sindhis as a barrier to Pakistan Tehreek-i-Insaf’s looming political foray.

The PTI has announced a public meeting in the PPP’s political and ideological headquarters of Larkana on November 21. “He wants to tell Sindhis that he would stand for Sindh’s protection and integrity. At the same time, he also wants to convey this message to the powerful quarters that being Sindhi nationalist is not being against Pakistan and that Sindh’s and Pakistan’s interests are one and the same.”

Dastgir Bhatti, another Sindhi columnist who has closely observed the PPP since its evolution, believes the visit has sent a message to at least four separate quarters. “He has strongly reiterated his stance against Sindh’s division to the MQM. He also tried to steal the nationalist leaders’ thunder, obstruct the PTI’s popularity and told the establishment that the PPP can take recourse to Sindhi nationalism if it’s cornered in its bastion of Sindh.”

The director of culture, tourism and archaeology department, Arshad Mehmood, told media that the government will build a mausoleum of Sheedi along with a guest house. The martyred general will also be glorified through cultural and academic activities.