Bilawal vows to continue mission of his mother

Bilawal vows to continue mission of his mother 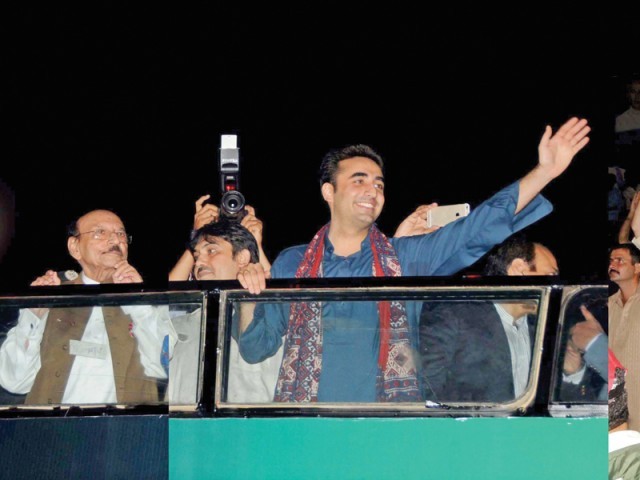 Bilawal waves to supporters from atop his container. PHOTO: EXPRESS

As workers of the Pakistan Peoples Party (PPP) streamed into the city from across the country for Saturday’s show of political strength, Chairman Bilawal Bhutto Zardari said that he has come to “continue the mission of his mother and grandfather”.

Arrangements were finalised for the PPP’s rally at Mazar-e-Quaid which will commemorate the deadly bombing on the homecoming rally of Benazir Bhutto, on October 18, 2007. Bilawal will address the gathering which is being described as ‘historic’ by PPP leaders, and kick off his political career. According to sources, Co-Chairperson Asif Ali Zardari will also make an important announcement at the rally about his party’s future strategy.

Before shifting to his container on Friday, Bilawal addressed PPP workers and supporters from the roof of Bilawal House. It is the same but refurbished bulletproof container in which Benazir had travelled on October 18, 2007 when her massive rally was targeted with a huge bomb.

In an emotional speech, Bilawal called himself the successor of the Bhutto family and the protector of the country. “I’ve come to continue the mission of my mother and grandfather [ZA Bhutto]… It is my priority to resolve people’s issues and make this country prosperous,” he added.

The PPP chairman called himself a true patriotic Pakistani and said his party was the only true democratic party in the country. “Today, as I stand on this container, I want to continue the journey to protect democratic values and strengthen the country. This journey was started by my mother on October 18, 2007,” he said.

Earlier in the day, Bilawal visited the grave of a 19th century Sindhi freedom fighter in Hyderabad district before coming to Karachi. In the sleepy village of Budho Siyal, Bilawal paid his respect to Hosh Muhammad Sheedi – the Talpur army general who had fought to the death against the British colonial power.

A large number of PPP workers and supporters have already reached Karachi from across the country. The party has arranged their accommodation at the KMC Sports Complex and other places.

“We can’t give you an exact figure, but hundreds of thousands of people from all over Pakistan, Azad Kashmir and Gilgit-Baltistan will participate in the rally which will start at 3pm,” said the secretary general of PPP’s Sindh chapter, Taj Haider. “It will be PPP’s biggest event since Shaheed Benazir Bhutto’s homecoming rally in 2007, which was attacked while passing through the Karsaz area.”

Special trains from Punjab, other cities of Sindh and the rest of the country carrying PPP supporters are set to arrive in Karachi today (Saturday). Over 22,000 vehicles carrying party activists will be coming from just rural Sindh, sources said.

“Around 4,000 vehicles have already reached Thatta district,” PPP MPA Owais Muzaffar told The Express Tribune on Friday. “Karachi has always been PPP’s fort and the Mazar-e-Quaid rally will prove which party is the biggest in Pakistan,” he said.

Muzaffar added that despite the attacks carried out on the PPP in the past, more than 2,000 of the party’s ‘janisars’ (diehard activists) will be providing security for the Mazar-e-Quaid gathering. “Every PPP leader is ready to sacrifice his life,” he added.

A total of 150,000 chairs have been placed inside and outside Bagh-e-Quaid, and a two-kilometre area around the venue has been sealed off with the help of shipping containers.

A spokesperson for the central police office said some 22,500 policemen will be deployed for the rally’s security. Around 200 sharpshooters would also be deployed on rooftops of buildings in the vicinity, he said. “The venue of the rally and all routes leading to it will be monitored by the police through CCTV cameras,” the spokesman added.

Before the event begins, Fateha and Quran Khwani will be held at the 2007 Karsaz blast site.