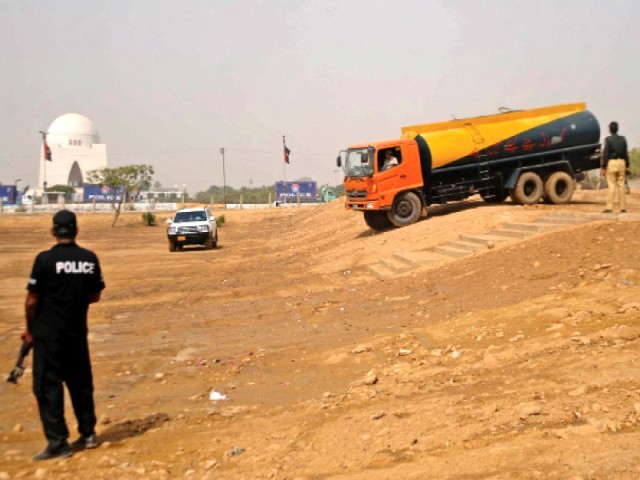 The Pakistan Peoples Party is all set to welcome a large gathering at its upcoming rally at the Quaid’s mausoleum on Saturday. Seating arrangements for as many as 150,000 people have been made alongside strict security measures. PHOTO: RASHID AJMERI/EXPRESS

Life is likely to come to a halt in the city today due to the Pakistan Peoples Party’s rally at the Quaid’s mazaar.

The Sindh government has already declared Saturday a public holiday to mark the urs of Abdullah Shah Ghazi which incidentally coincides with Bilawal’s formal launch into politics.

Residences located around the VIP routes – Sharae Faisal, Sharae Quaideen were surveyed. “We have surveyed around 1,800 houses and apartments close to the rally’s venue,” said a senior police officer, while talking to The Express Tribune. “These include Khudadad Colony and Lines Area. The survey will also help us in the future, particularly during Muharram.”

The cellular services may also be suspended in the city. The police has requested that all mobile network services should remain suspended as a security measure.

The Sindh government has reportedly written to the federal government to suspend mobile phone services in the city on Saturday.  PPP Senator Saeed Ghani, however, said that mobile services will not be suspended but jammers might be installed at the venue.

Around 22,500 police personnel will be on duty on the day of the rally, said Karachi police spokesperson. They have asked for men from the Sindh Reserve Police, Hyderabad and other regions for the rally.

According to the spokesperson, the media will not be allowed to use drone cameras.

He said that search and surveillance parties will be using 110 walk-through gates while many CCTVs cameras will also be operating in the area.

Two Special Security Unit vans equipped with the latest technology will be stationed at the venue. One will be used to monitor the venue while the other will be there for the VVIPs. Around 27 parking lots will be available for vehicles while the Karachi Traffic Police has also issued a separate operational plan, which includes diversions and parking arrangements to maintain a smooth flow of traffic.

Transporters and businessmen have said that they will work according to their routine. The chairperson of the Karachi Tajir Ittehad Atiq Mir told The Express Tribune that the city will be open for business on Saturday and all the major markets will be open as usual except those near the rally due to security concerns. The electronic market in Saddar, Sea Breeze area and Guru Mandir will remain closed.

Karachi Transport Ittehad chief Irshad Bukhari said that the PPP had hired 3,000 minibuses and coaches to ferry people to the rally.

Public and private educational institutions in the city will remain closed on Saturday as the Sindh government has announced a public holiday.

“Please understand that we avoid cancelling classes on weekends as it is extremely difficult to reschedule these sessions,” said the executive director of a private university in Defence Housing Authority. “Unfortunately, the situation is sometimes beyond our control.”

Meanwhile, Karachi University and the Sindh Board and Technical Education have also postponed exams scheduled for the day. However, the courts will remain open.

All hospitals in the city have been told to stay on alert. Over 100 ambulances from Chhipa, Edhi and other welfare organisations are ready on standby in case any untoward incident takes place.