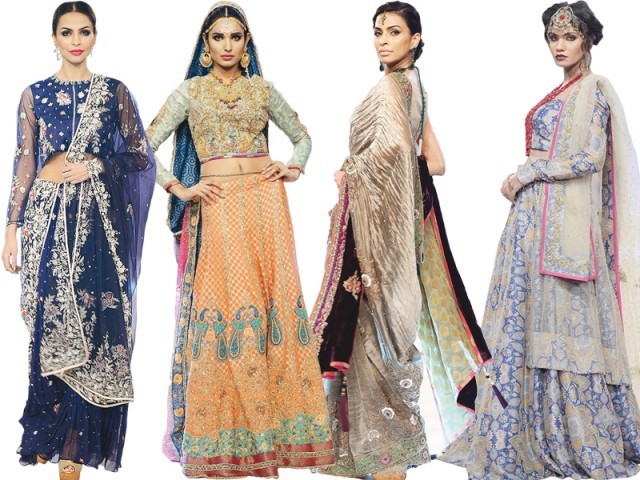 Fashion detectives at The Express Tribune had their magnifying glass out at the recent PFDC L’Oréal Paris Bridal Week (PLBW) 2014 to see what are set to trend this season. Here is a breakdown of our six favourite features from the runway. Saris: The sari has made a real impact on the runway this year with every designer showing at least a few saris as a part of their collections. Saris are timeless and a great investment. They never go out of style and can be passed down from generation to generation. From two-way saris that merge nets, velvets and/or embellished paloos, wearing one of these funky saris will help you make a statement. Another dominant trend on the runway was saris with long jackets. This look adds a layered dimension to the sari, making it stand out. High-waisted lehengas and pants: Not everyone may feel comfortable wearing short cholis, so whether this was a conscious decision or a just a style statement on the designer’s part, we are bowled over by the high-waisted lehengas that were opted for. Be it pants or lehengas, this is a flattering cut as it cinches the waist and makes one look both slimmer and taller. Simple silhouettes: Designers played it safe with their cuts this PLBW, but went over the top with embellishments. So, while the silhouettes were muted, embellishments were just as loud. Nets embellished with gaara embroidery and sequins have got to be the biggest trend. Misha Lakhani’s kimono kaftan was a great example of keeping apparel trendy yet simple. Velvet trimmings: Needless to say, this trend is here to stay. Velvet is a regal winter fabric, which has been reigning over wedding seasons for the last two years. This year also saw velvet stoles by Nickie Nina along with the fabric being opulently used by Misha Lakhani and Sana Safinaz in their collections. Colours: There was a myriad of colours showcased this year at PLBW. From neons to dusky metallics, colours took charge on the runway and it all comes down to your mood and what you want to wear. From Nida Azwer’s white-on-white pieces to Sana Safinaz’s rich metallics to Fahad Hussayn’s discreet choices, this season is all about elevating your personal style with a diverse colour palette. Prints: Prints, prints and more prints! This is the season to merge your formal wedding trousseau with some rich prints. From printed undershirts to printed lehengas to dupattas to lining, every designer juxtaposed such pieces with embellishments. So, pull out those old printed silk dupattas and explore how you can incorporate them into your wedding attire. From Zara Shahjahan’s printed lehenga choli to Sania Maskatiya’s printed underlining, this was a feature that will be all the rage this season. So, be the first to adopt it.