War of words: Pakistan will fully respond to any aggression, says Khawaja Asif

War of words: Pakistan will fully respond to any aggression, says Khawaja Asif 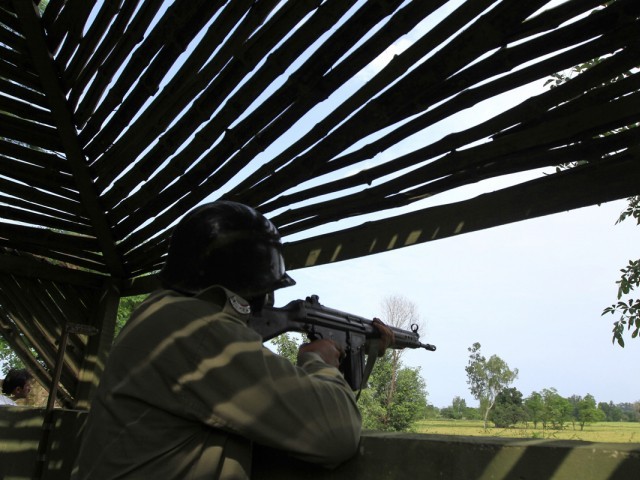 A Pakistani military official told The Express Tribune that security forces were only responding to the ‘unprovoked’ firing from the Indian side. PHOTO: AFP

Islamabad and New Delhi engaged in a war of words on Thursday after another two civilians were killed on the Pakistani side of the Line of Control (LoC) as border clashes continued between the two neighbours.

Hours after Indian Defence Minister Arun Jaitley warned Pakistan that it would be made to pay an ‘unaffordable’ price if the clashes continued, his Pakistani counterpart insisted that Pakistan will respond to any Indian aggression. However, unlike Jaitley, Defence Minister Khawaja Asif added a reconciliatory note to his statement, saying, “We don’t want to convert the border tension between two nuclear-armed neighbours into confrontation.” The Pakistani defence minister urged New Delhi to act ‘in a responsible manner’.

“I don’t need to speak, our guns will do it. We have responded with courage to ceasefire violations,” Modi said at a campaign rally on Thursday, replying to opposition criticism that he had not been vocal during the crisis. Both sides have denied responsibility for the clashes. A Pakistani military official told The Express Tribune that security forces were only responding to the ‘unprovoked’ firing from the Indian side.

Meanwhile, Jaitley claimed that Pakistan was responsible for the surge in violence along the Line of Control and working boundary. “If Pakistan persists with this adventurism, our forces will make the cost of this adventurism unaffordable,” Jaitley told journalists in New Delhi. “Pakistan should stop this unprovoked firing and shelling if it wants peace on the border.”

Jaitley added that his country had a “duty to defend its people”, as he accused Pakistan of trying to “precipitate tension where none exists.” Border Security Force (BSF) sources claimed Pakistani Rangers targeted 50 border outposts and 35 hamlets overnight along the 192-km boundary.

The escalation has triggered an exodus, with 16,000 people moving to safe areas from border villages. Indian forces have been asked to retaliate and reject talks until all firing stops, according to top government sources.

Pakistan’s Major General Khan Tahir Javed Khan, responsible for the section of the border where the violence has broken out, said that India had fired 20,000 shells so far this year, compared to just 200 in 2012. He also said he had been trying to meet his Indian counterpart since the exchanges of fire began, but they would not return his calls.

Jaitley’s warning came a day before Prime Minister Nawaz Sharif is scheduled to meet with the military leadership regarding deteriorating ties with India. Sources told The Express Tribune that the government will seek to de-escalate tension and resolve the issue through dialogue. However, civil and military leaders are expected to reaffirm their resolve to defend the country against any aggression.

Meanwhile, Jammu and Kashmir Chief Minister Omar Abdullah on Wednesday directed the administration to take all requisite measures for ensuring safety of life of the people in areas hit by shelling. “Food, temporary shelter, transportation, medical facilities and supply of drinking water should be made available at the camps,” Omar said while meeting via video conferencing with the divisional commissioner, inspector general and deputy commissioner of Jammu.

Twenty four temporary camps have been established in Jammu, Samba and Kathua districts and over 7,000 people are residing in these camps.