Leather me up: Karachi sheds 20% more skin than last year

Leather me up: Karachi sheds 20% more skin than last year 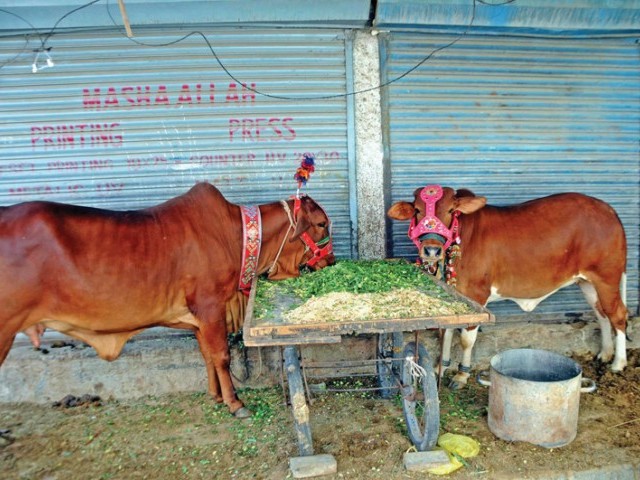 According to tannery officials, the rate for cow hides has gone up by at least 25% as compared to the last year’s Rs3,600. PHOTO: EXPRESS

Eidul Azha is either about meat or the hides that hold it.

In Karachi, it means big business. It is estimated that charities and political parties earn about Rs2.5 billion a year by collecting the hides of sacrificial animals, said an official from the Pakistan Tanners Association (PTA).

Several of these parties and organisations spend a lot of money in advertising and convincing people to donate the hides to them. They keep asking for more and more but don’t exactly share how much they earn by selling the hides.

“Until 2012, the tanners association used to take up the responsibility of arbitrating between its member tanneries and charity organisations or political parties,” explained Shaikh Muhammad Imran, a former executive committee member of the PTA. “The association would put their hides out to tender and invite sealed bids from tannery owners for fair deals. Since last year, however, charity and political organisations started conducting their own business deals with tanneries of their choice.” He added that most of the business deals were not documented in public records.

Going by the numbers put up by the leather industry, the rate for cow hides has gone up by at least 25 per cent as compared to the last year’s Rs3,600, while the rates for goatskin has decreased from last year’s Rs625 by 20 per cent.

“This year, a cow hide is expected to fetch as much as Rs4,500 while Rs500 is the expected amount for goatskin,” said Kashif Anis, an executive committee member of the PTA. “In contrast to the increased demand for cow hides, there is a slump in local and international demand for the goatskin.”

The Edhi Foundation told The Express Tribune that they received 10 per cent less hides as compared to last year.

On the other hand, Jamia Binoria International’s administrator Maulana Ghulam Rasool said that seminaries and mosques in the city had collected roughly 20 per cent more hides than they did last year.

“Our collections went up this year as the citizens of Karachi had the opportunity to donate the hides wherever they wanted,” said Maulana Rasool. “There was no fear or intimidation this year.”

Jamaat-e-Islami’s (JI) Al Khidmat Foundation, a big player in the hides business, claims to have received around 15% more hides as compared to last year. “It is a positive thing to note that no incident of violence was reported during the three days of Eid,” said the foundation’s spokesperson, Noman Khan Lodhi.

“It took a lot of organisation and care,” said the Muttahida Qaumi Movement’s charity organisation – the Khidmat-e-Khalq Foundation, another big player in the business.

Last week, MQM chief Altaf Hussain had warned party workers that any members found to be involved in using force to collect animal hides would be kicked out from the party. The party, however, claimed that some of its workers faced problems during the hide collection in Burnes Road, Ranchore Lines and Defence Housing Authority but the issues were resolved after talking to the area representatives.

The Shaukat Khanum Memorial Cancer Hospital, which also collects animal hides every year, claimed that they also witnessed a rise in its collections in Karachi. According to the hospital’s regional manager, Mudassir Habib, they had collected an estimated 4,000 to 5,000 hides so far. He said that money from the hides would be used for treatment of cancer patients.