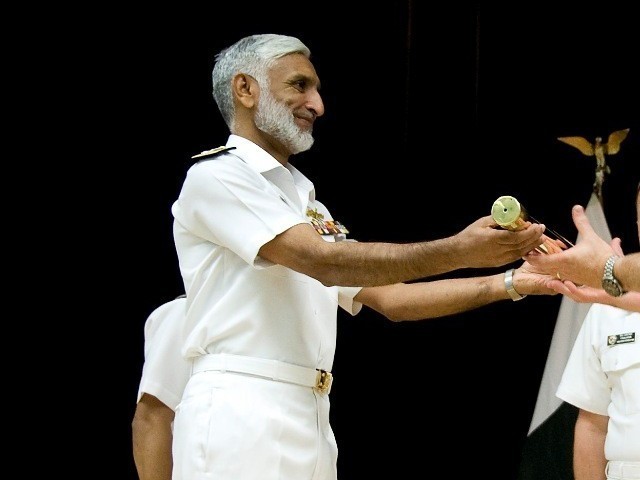 In a ceremony at Pakistan Naval Headquarters in Islamabad today, the outgoing naval chief handed over the command of Pakistan Navy to the new chief.

President Mamnoon Hussain, who is also the supreme commander of armed forces of the country, had on October 2 approved Zakaullah’s promotion as four-star admiral and appointed him the new Chief of Naval Staff.

In his farewell speech, Sandila said that as chief of the Pakistan Navy it was his top priority to keep the navy stable which is it has the capability to put an end to ulterior motives of terrorists.

Zakaullah, while addressing the ceremony, thanked the president for appointing him as the new chief, adding that he will fulfill his duties vigorously.

Ensuring maritime security is mandatory for national security for prosperity of the country, he stated.

“In all areas of Pakistan Navy, development and merit will be first priorities,” he said.

The new navy chief also stated that he will further enhance the operational capabilities of Pakistan Navy, further stating that the navy has the capability to overcome any sort of challenges.

Implementing government policies, navy will keep on carrying out its role on a regional as well as a national level, Zakaullah added.

Zakaullah was among the three other three star vice admirals of the Pakistan Navy whose names were being considered for the top slot.

The newly promoted admiral will command the navy for the next three years.

Zakaullah is a graduate of the Royal Naval Staff College in UK and National Defence University Islamabad. He holds a masters degree in Defence Studies from London University and an MSc (in War Studies) degree from the Quaid-e-Azam University.