Of food and sacrifice: K-P gets a head start in annual festivities

Of food and sacrifice: K-P gets a head start in annual festivities

IDPs face Eidul Azha away from home, unable to afford any of the associ­ated tradit­ions .
By Our Correspondents
Published: October 6, 2014
Tweet Email 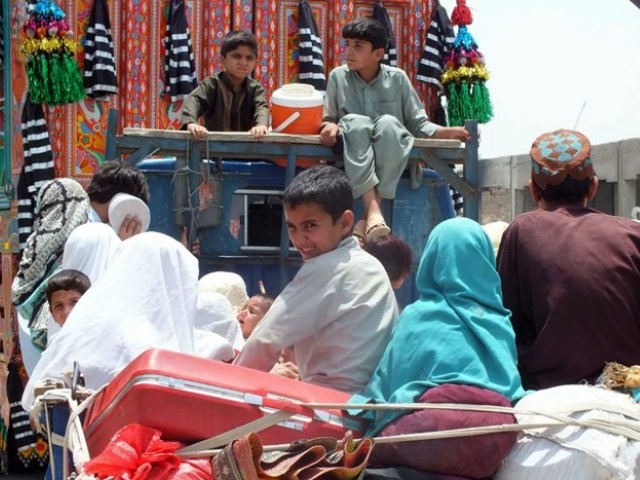 A file photo of an internally displaced family. PHOTO: REUTERS

Unperturbed by the discrepancy in official dates, Khyber-Pakhtunkhwa and the tribal belt celebrated Eidul Azha with full fervour on Sunday. Even ministers of the province decided to stay in step with their constituents, despite the lack of an official announcement from the provincial government regarding the date of the annual celebration. The chief executive of K-P, CM Pervez Khattak, offered Eid prayers in Nowshera.

In a handout issued on Sunday, CM Khattak said, “Since the present atmosphere of the country requires mutual unity, fraternity and dedication to the welfare of our brothers, we should rise above political affiliations.” He added, “Internally displaced persons (IDP) need our utmost attention and assistance as it our religious and national obligation to go to their aid,” the handout quoted Khattak as saying.

Besides the provincial capital, people in Mardan, Nowshera, Charsadda, Kohat, Bannu, Hangu, parts of DI Khan, Swabi and parts of the tribal belt observed Eid on Sunday while people from Swat, Chitral, Hazara Division, Dir and Buner will observe Eid with the federation today.

IDPs from North Waziristan Agency (NWA) will see their first Eidul Azha away from home, without any traditional festivities.

According to the FATA Disaster Management Authority (FDMA), around 8,000 people have migrated to different areas of Peshawar in wake of the military operation. They are living in rented properties at Warsak Road, Ring Road, Dalazak Road, Charsadda Road, Shaheen Town and Hayatabad.

Displaced families expressed dismay over being ignored even though they have put their comfort at stake for the future of the people.

Gul Wali from NWA told The Express Tribune this was the first time they observed Eidul Azha without an animal to sacrifice.

“Before we were displaced, we [five brothers] slaughtered a cow and two goats but this time we aren’t in a position to sacrifice even one animal,” he said. Wali added for the first time his children will be without new clothes and shoes on such an occasion.

Wali has a family of 27; all of whom are living in four rooms of a rented house at Warsak Road. “It is very difficult for us to live in this small house but we have no other option,” he said.

Raheed Dawar, another IDP living at Charsadda Road said he receives a monthly stipend of Rs19,000—Rs4,000 from the federal government and Rs15,000 from the K-P government. From that he pays Rs10,000 as rent and the remainder is all that is left for other expenditures. “Back home I used to sacrifice two animals every year but this time I can’t.”

According to FDMA’s statistics, a total of 63,906 families have been registered, out of which 2,270 are living in Baka Khel camp, Bannu, while the rest are in various parts of the country.

An FDMA official requesting anonymity said that no Eid package was given by the government while the monthly allowance of Rs 19,000 is given only to the registered IDP families.