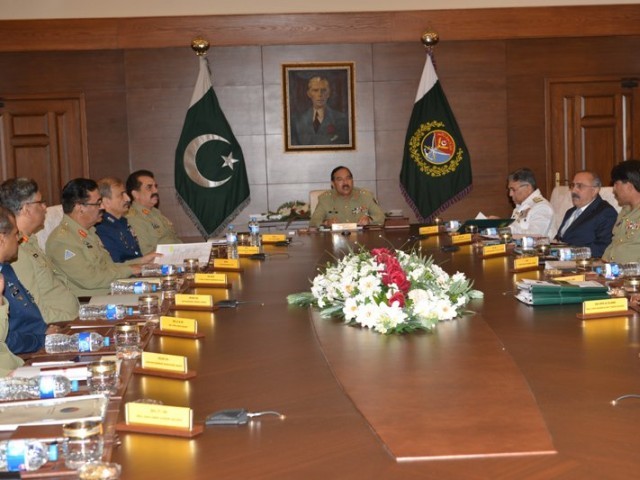 Military chiefs on Tuesday vowed to eradicate terrorism from the country as another 19 suspected terrorists were killed in fresh air strikes in North Waziristan Agency.

On a day when warplanes targeted suspected hideouts of militants in Dandi Kachkol area near Ghulam Khan and Gurbaz and Mana area near Pasht Ziarat in North Waziristan, a meeting of Joint Chiefs of Staff Committee was held at the Joint Staff Headquarters in Rawalpindi to review progress in Operation Zarb-e-Azb.

The JCSC is a quarterly meeting of senior military leadership to assess and evaluate operational preparedness of all three services.

According to the ISPR, the participants appreciated the strides against the menace of terrorism and the progress made in Operation Zarb-e-Azb. The meeting reaffirmed the resolve of the armed forces to eradicate terrorism from the country as per a comprehensive security strategy.

The satisfaction over the standard of preparedness of the armed forces to take on the upcoming challenges being faced by the country was also expressed in unequivocal terms.

The military operation in North Waziristan, which was considered a hotbed of several local and foreign militant outfits, was launched in June this year.

The military claims to have taken control of major towns of the troubled agency bordering Afghanistan. Over 1,100 suspected militants have so far been killed in the operation while close to 90 soldiers have also lost their lives.

A senior military official said that the army wanted to purge the entire region of militants before the onset of winter season but added that rehabilitation and stabilisation operations would take months.