Imran calls on Karachi to unite in support of PTI's campaign

Imran calls on Karachi to unite in support of PTI's campaign 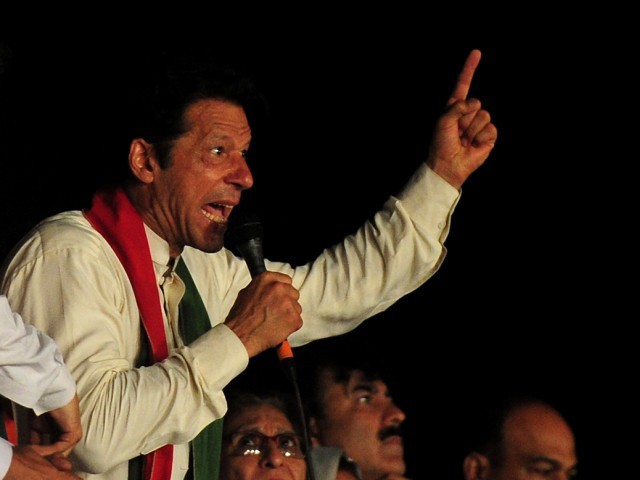 I visited the flood affected Chiniot and Jhang today and everyone there were chanting ‘Go Nawaz Go’, said PTI chairman. PHOTO: AFP

KARACHI: Pakistan Tehreek-e-Insaf (PTI) chairman Imran Khan addressed a crowd of roughly 80,000 to 100,000 supporters in Karachi on Sunday, vowing to continue his campaign to overthrow the Pakistan Muslim League-Nawaz government until the prime minister stepped down.

Thousands gathered against the backdrop of the Mazar-e-Quaid in Karachi to support the PTI chief, who flew in from the capital, where his party and supporters have been camped in the Red Zone for the past 39 days.

Referring to his ongoing sit-in in Islamabad, the PTI chairman said that the people of Pakistan have been struggling to make a “naya Pakistan.”

He called on the people of Karachi to support his struggle and claimed to have come to the city to “unite everyone” – Sindhis and Muhajirs alike.

“The sit-in will continue till Prime Minister Nawaz Sharif resigns,” he reiterated. “It is our fundamental right to elect our leaders through our votes, not through rigging.”

Imran assured his supporters that he would win the “war” against Prime Minister Nawaz Sharif.

“God has trained your kaptaan to compete and I will compete,” the PTI chairman said, adding, “Nawaz Sharif, you will have to resign.”

Lashing out at the premier, Imran said, “The US, Saudi Arabia and Gullu Butts will not be able to save you. No one can save you.”

Citing the various problems faced by residents of Karachi, particularly the law and order situation, he alleged that target killings could not occur without the involvement of the government.

“We will arrest target killers in Karachi within months,” he claimed.

He went on to say that since no one has been held accountable for rigging in the general elections, he came out on the streets to ensure free and fair elections in the future.

There would be no prosperity until and unless there is justice and rule of law in the country, he added.

Imran went on to say that “three institutions need to be revamped, namely education, police and judiciary.”

“Police has to be depoliticised and impartial,” he said, adding, “In Khyvber-Pakhtunkhwa police has zero interference and selection is made on merit. We will bring impartial police here in Karachi,” he said.

Refuting claims that he has been staging his sit-in on the directions of “someone”, Imran questioned the crowd if they were directed by someone to attend his rally.

Imran was joined at the rally by PTI leaders Shah Mehmood Qureshi, Jahangir Tareen, Arif Alvi, former cricketer Javed Miadad, former olympian Samiullah Khan, and the ever popular DJ Butt, among others. Apart from the tunes, supporters were also treated to a display of fireworks.

Meanwhile, PTI vice chairman Shah Mehmood Qureshi thanked the people of Karachi who stood in line for several hours to vote for Imran Khan during the 2013 general elections.

“I admit we couldn’t give as much attention to Interior Sindh but we (PTI) promise we will go to every street and every corner of Sindh,” the former foreign minister said.

“Today, people don’t see PPP as Bhutto’s party but as Zardari’s party,” said Qureshi, adding, “People in Sindh will come out on the streets to oppose Zardari’s power.”

The PTI vice chairman lashed out at both the PML-N and PPP while addressing supporters in Karachi.