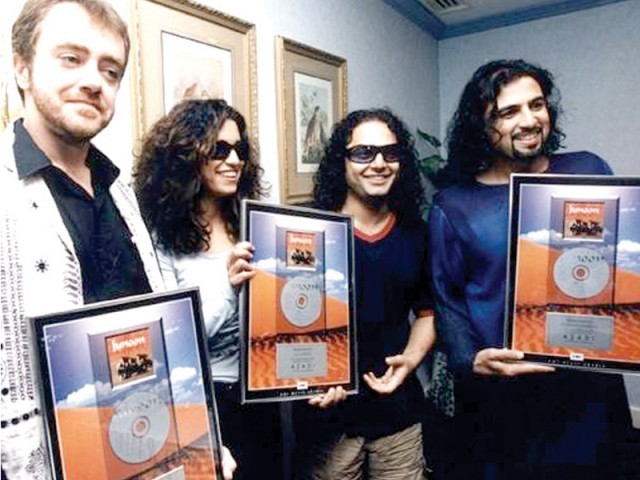 Despite all the infighting, break-up and creative differences the Pakistani rock band, Junoon kept on producing quality music. Labelled as the ‘U2 of Pakistan’ by The New York Times, it has been the most followed band of the subcontinent.

The Junoon’s fourth studio album, Azadi was no different as it hit platinum sales. The album was a tremendous success not only in South Asia but also worldwide resulting in the band travelling to India for their very first tour of the country where they attracted crowds of more than 100,000 people in their concerts This picture was taken at the time of the certification and reminds us of Junoon’s journey that brought Pakistani rock music on the map and even introduced much debated terms like ‘Sufi Rock’.

It was also during the tour that Salman Ahmed attracted controversy by stating that India and Pakistan should spend more on health and education rather than creating weapons of mass destruction.

The band disbanded after the release of their album, Dewaar with bassist Brian O’ Connell returning to his America and Ali Azmat decided to pursue a solo career.

Salman Ahmed now continues to work as an Inquilaabi alongside Imran Khan and is gearing up for a Vital Signs reunion with former bandmates Junaid Jamshed and Shahzad (Shahi) Hassan. Ali Azmat on the other hand served as a judge on the inaugural season of the music reality show, Pakistan Idol.