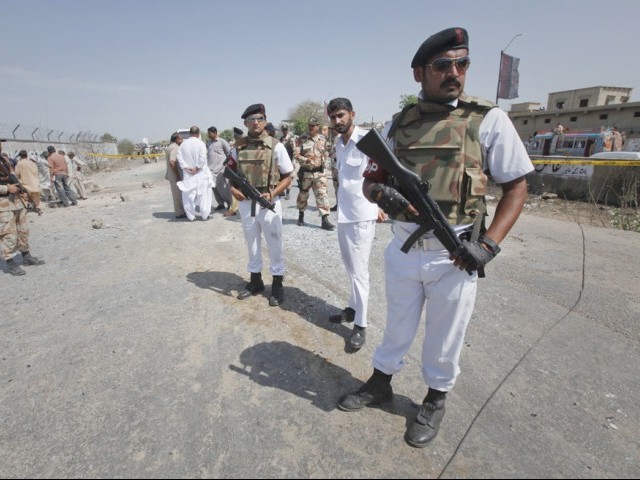 Pakistan Navy security personnel and SSG commandos responded to the attack and in the ensuing encounter – which continued for six hours – killed two terrorists and apprehended four others. PHOTO: REUTERS

At least two terrorists were killed and four others were captured during a six-hour long firefight with the intruders.

A navy spokesperson confirmed through a press statement in the late hours of Monday that a group of miscreants had tried to penetrate the navy dockyard in Karachi.

The spokesperson said following the attack – whose details were not disclosed earlier as a matter of policy – Pakistan Navy security personnel and SSG commandos responded valiantly and in the ensuing encounter – which continued for six hours – killed two terrorists and apprehended four others.

“During the engagement with miscreants, one petty officer embraced Shahadat while another officer and six sailors sustained injuries. All injured are out of danger and being treated in the hospital,” he said.

The naval spokesperson said the terrorists failed to inflict any material loss. “The area was combed and cleared for normal activities the same day,” he added.

He said subsequent to interrogation of the apprehended miscreants, immediate raids were conducted by the intelligence agencies which led to arrest of other collaborators and accomplices from different parts of the country. During these raids, large quantity of arms and ammunition were also recovered, he added.

According to the spokesperson, the chief of the naval staff appreciated the valour and alertness of all the personnel involved in the operation. He also visited the injured personnel and individually appreciated and acknowledged their bravery.

In addition to a formal inquiry, investigations by intelligence and other law enforcement agencies are in progress, he added.