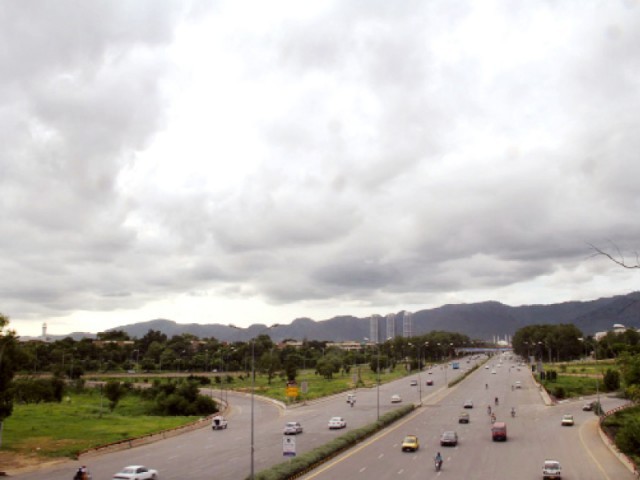 The recent spell has brought down the mercury level in the twin cities. PHOTO: INP

A fresh spell of monsoon rains which began on Monday brought down the temperature by four to five degrees, turning the weather extremely pleasant in the twin cities.

However, rather than hitting the scenic picnic spots to enjoy the weather, most residents chose to stay indoors owing to the sense of fear and panic that has been prevailing for the last 19 days due to the on-going protests.

A meteorologist at the Pakistan Meteorological Department (PMD), Muhammad Imran, told The Express Tribune that this fresh spell of rain is expected to continue till Friday and the temperature will further drop during the night.

He said on Sunday, the day’s temperature was recorded at 35 degrees Celsius which on Monday dropped to 30 degrees after the morning shower and on Tuesday, further dipped to 29 degrees Celsius.

Talking about the expected showers, he said, “PMD is expecting light to heavy rainfall during the coming days and after this, another fresh spell of monsoon rain is expected to start from next week.”

He was of the view that the showers, expected to continue throughout September, would bring relief from heat.

Terror among residents of the capital due to the ongoing protests overwhelmed the charm of the pleasant weather.

“Whenever there is rain, especially in the summers, a huge crowd visits the Lake View Park in the evening but on Monday the spot wore a deserted look,” said a Capital Development Authority worker at the Rawal Lake View Park who wished not to be named.

He said even though ahead of the planned march to the capital, people had stopped coming to the park as the road leading to the venue was also blocked, there has been a further drop in the number of visitors since the clashes began.

“However, it is estimated that there has been 80 per cent drop in the number of customers,” he said.

Majid Hussain, a resident of Sector F-6/3 who had come along with his family to Super Market to shop, said, “Since Saturday night we were at home and scared to go out and today we have come out as my daughter is leaving for USA next week so she wanted to buy some clothes.”

He said it is painful to see that the most safe and peaceful sector of the capital has turned into a war zone making us hostages.