Against all odds: Festival aims to provide youth the opportunity to a better life

Against all odds: Festival aims to provide youth the opportunity to a better life 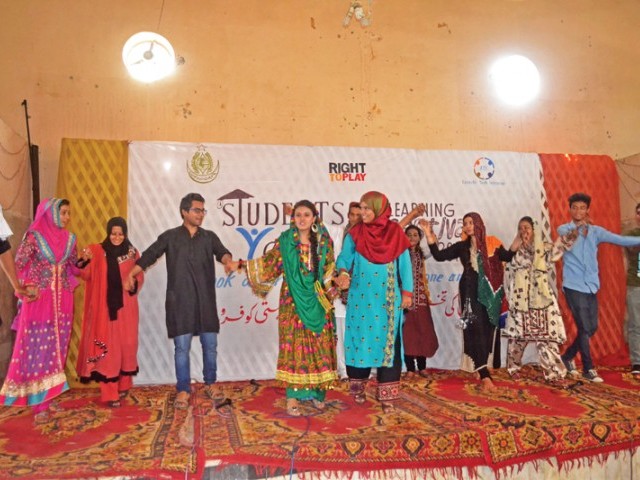 Over 250 young boys and girls participated in the Youth Festival at the Shah Bhittai Hall in Lyari. The event featured several educational activities aimed to spread awareness among the youth regarding the importance of education. PHOTO: EXPRESS

KARACHI: The youth of Lyari want to inspire the world through their struggle and hardship for the sake of education. They want to serve the country and are keen to develop skills that will help them stand out amongst the crowd.

“We want the world to know that Lyari is not a war zone,” said 13-year-old Alina Batool. She was one of the participants at the ‘Youth festival for entrepreneurship and community building’.

The youth festival was organised by ‘Right to Play’, in collaboration with the ‘Karachi Youth Initiative’ at the Shah Latif Bhittai Hall, Lyari, on Monday. The non-governmental organisations aim to provide quality education to children in less privileged areas.

Students from under-privileged areas are trained by the organisations. These students then voluntarily work for the betterment of education and skills development in their respective areas. A 20-year-old head coach for two schools in Lyari, Anisa M Anwar, explained that she conducts physical training sessions for students between the ages of five to 10 years.

The festival was attended by over 250 youth, where stalls were set up by young entrepreneurs from Kharadar, Bakra Piri and Moosa Lane. “It is a great initiative,” remarked one stall owner, Abdul Javed. “I am happy that my son now has the opportunity to polish his skills; something I never had.”

Illiteracy and lack of communication skills are two of the biggest problems that plague these areas, according to Javed. “It takes three days to build a mud house, but around 15 days to create this vase with intricate designs of mirrors,” he said, pointing towards one of the artefacts on display at his stall. “In this era, being educated is not enough. You should also have strong communication skills, something that is lacking in Lyari.”

The festival featured educational activities, including a panel discussion on youth activism in the community. Various groups belonging to Korangi, Lyari and Sultanabad participated in the discussion. At the other end, a documentary-making session and an informative lecture on ‘how literature can be used to promote peace’, kept the audience engaged.

The session was followed by a performance by a Lyari-based theatre group. Themed on the issues of ethnic divide and cultural diversity, the thought-provoking play had an astounding effect on the audience as the Shah Latif Bhittai Hall echoed with whistles and tumultuous applause.

The puppet show and magic show by the Kids Theatre Group also attracted a large audience.

Perhaps the highlight of the day was the enchanting performance by 23-year-old Khaif Khalil, a singer and guitarist. With a strong inclination towards Sufi music, the young man idolises Javed Bashir and hopes to follow in his footsteps one day. The journey, he says will not be easy though. “I recently missed the chance to meet a renowned music director due to the restless situation in Lyari,” he smiled sadly.