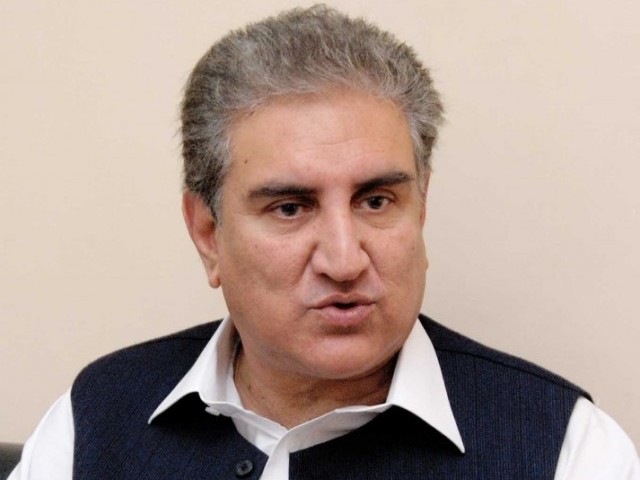 Prime Minister Nawaz Sharif will be responsible if martial law is imposed in the country, Pakistan Tehreek-e-Insaf’s (PTI) leader Shah Mehmood Qureshi said at a press conference in Karachi.  The PTI leader arrived in Karachi along with other local leaders to express gratitude to supporters who participated in the sit-ins and relay a special message from PTI chief Imran Khan. Shah Mehmood Qureshi upheld demands for PM Nawaz’s resignation.

“PM Nawaz should take a decision – otherwise the people will have to take a stand.”

The PTI leader insisted that the party was committed to safeguarding democratic principles but said that the basis of democracy was transparent and fair elections.

The PTI leader said that if the government had paid attention to their demands to recount votes 14 months ago, the situation would not have escalated to this point. Similarly, if an FIR of the Model Town incident had been registered immediately, there would have been no sit-ins by PAT activists, he said.

Shah Mahmood Qureshi requested the judicial commission to present its report within 30 days. However, he added that the prime minister’s resignation is the only solution to end the deadlock.

The PTI leader expressed interest in garnering support from other parties – especially the MQM –to navigate Pakistan out of the political turmoil and make it a prosperous country. However, he insisted that the purpose of the Azadi march was not to form alliances but highlight the significance of free and fair elections.

Speaking to the PAT chief on Thursday morning, Altaf told Qadri that the governors of Sindh and Punjab had made a concerted effort to resolve the political crisis through dialogue.

The MQM chief advised Qadri not to make rash decisions and only act after thorough deliberations with the government.