Afghan election in crisis as candidate pulls out of audit

Afghan election in crisis as candidate pulls out of audit

Abdull­ah Abdull­ah claims that massiv­e fraud was commit­ted agains­t him in the June 14 vote
By AFP
Published: August 27, 2014
Tweet Email 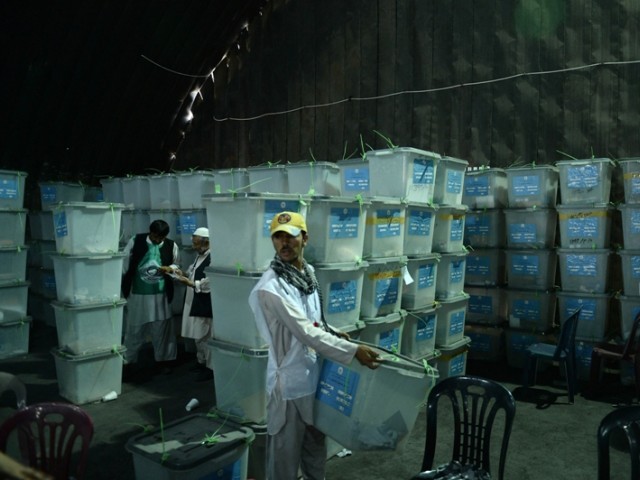 An Afghan election commission worker carries a ballot box as workers wait to begin the audit of the presidential run-off vote in the country's general election at a counting centre in Kabul on August 27, 2014. PHOTO: AFP

KABUL: Afghanistan’s fraud-hit election teetered on the brink of collapse Wednesday as one of the two candidates boycotted the UN-supervised vote audit set up to end a prolonged dispute over the rightful winner.

Abdullah Abdullah, who claims that massive fraud was committed against him in the June 14 vote, pulled out of the audit after his senior campaign officials dismissed the process for invalidating fake votes as “a joke”.

The stand-off between Abdullah and his poll rival Ashraf Ghani has threatened to revive ethnic violence in Afghanistan as US-led NATO troops withdraw after 13 years of fighting Taliban insurgents.

The audit of all eight million votes was halted on Wednesday when Abdullah’s observers refused to take part, despite a US-brokered deal in which both sides vowed to support the recount and respect its outcome.

“Talks are ongoing with the UN. If that reaches an agreement, we will come back. If not, that is the end of it.”

The audit was designed to strengthen the legitimacy of the next government. Any street protests by Abdullah supporters could set off a spiral of instability that the UN fears would revive the divisions of the 1990s civil war.

Many of Ghani’s supporters are Pashtuns in the south and east, while Abdullah’s loyalists are Tajiks and other northern groups.

With both candidates claiming victory, outgoing President Hamid Karzai has raised the stakes by insisting that his successor will be inaugurated next Tuesday.

“I think now they know they have lost the election, and to hide their defeat they are trying to make excuses,” Aleem Fedaee, a member of Ghani’s team, told reporters.

“We have already agreed on the procedures. Any changes will be against the law and against the agreements.”

Abdullah claims he was cheated out of victory in the 2009 presidential election and says history is repeating itself via ballot-rigging in favour of Ghani, whose camp denies the charge.

After Abdullah’s team issued its withdrawal threat on Tuesday, the United Nations mission in Afghanistan underlined that both campaign teams were consulted on the audit and have “joint oversight” of the process.

Abdullah, a former anti-Taliban resistance fighter, won the first-round election in April out of a field of eight candidates, but preliminary results from the June run-off showed that he was far behind Ghani.

Furious supporters of Abdullah have pushed him to form a “parallel government”, while officials have denied reports that some ministers planned to set up an “interim administration” to take power.

Western nations which have sent troops and billions of dollars worth of aid to Afghanistan since 2001 still hope that a credible election will be a flagship of progress made since the austere Taliban era.

US-led foreign troop numbers have declined from a peak of 150,000 in 2012 to just 44,300 now, with Afghan soldiers and police struggling to beat back new Taliban offensives in the south and east.

All foreign combat troops are due to withdraw by year-end.

Moradian Dawood, director of the Afghan Institute for Strategic Studies (ISSA), said the two men were using different “levers” to try to plot their way to power.

“Abdullah has the threat of a parallel government, but Ghani alludes to the support of Hamid Karzai,” he said.

Karzai, who has been president since the Taliban regime was ousted, has stayed publicly neutral in the election dispute — while warning that the impasse has badly damaged Afghanistan’s fragile security and economy.

The US has been pushing for the next president to be inaugurated before a NATO summit starting on September 4, which should sign off on follow-up support after the coalition’s combat mission in Afghanistan ends this year.