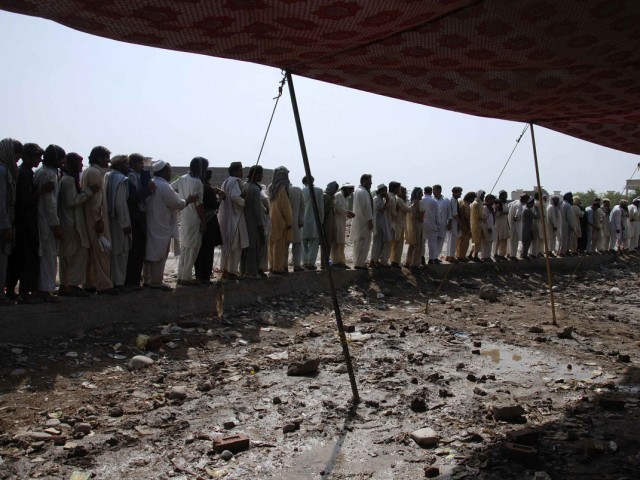 While the majority of people might be satisfied with the army and government providing shelter to IDPs, the ground realities are far from positive. PHOTO: REUTERS

How wonderful it would be if one were able to live life in a systematic manner, to drop off their children daily at school and go to work. It is unfortunate for the hundreds of thousands of people displaced by the ongoing military operation in North Waziristan that they live each day in uncertainty in a strange place, not knowing when they will be able to return home and to normalcy. Issues faced by IDPs have been outlined in a recent release titled the Multi-Clustered Initial Rapid Assessment (MIRA) Bannu Report by the Provincial Disaster Management Authority. The issues highlighted point to the question of whether the government and the army are truly taking care of these IDPs and calls for much introspection regarding the quality of life of IDPs, in terms of meeting their basic health, education and safety needs.

The IDPs camped in Bannu require immediate implementation of security to prevent all harassment, threat and assault. Furthermore, it is unfair that women heads of households are unable to obtain aid due to lack of documentation and tribal elders prohibit them from going to distribution facilities — the latter for which a security force should also be in place. Finally, this is an ideal opportunity for Nadra to register citizens who lack official documentation, who may otherwise never be registered in their lifetimes. In going forth with Zarb-e-Azb, there is a desperate call for prudent thinking and planning on the state’s part.

While the majority of people might be satisfied with the army and government providing shelter to IDPs, the ground realities are far from positive. With schools soon reopening, school buildings need to be made available for displaced children and the IDPs shifted elsewhere. As the situation currently stands, with low school attendance and the occupation of schools by IDPs who have nowhere else to go, the province — because of the lack of our state’s foresight— is breeding a whole generation of uneducated children, which is the last thing this nation needs. Proper infrastructures and facilities should have been put into place prior to the start of the operation — the ramifications of which the IDPs are now suffering.