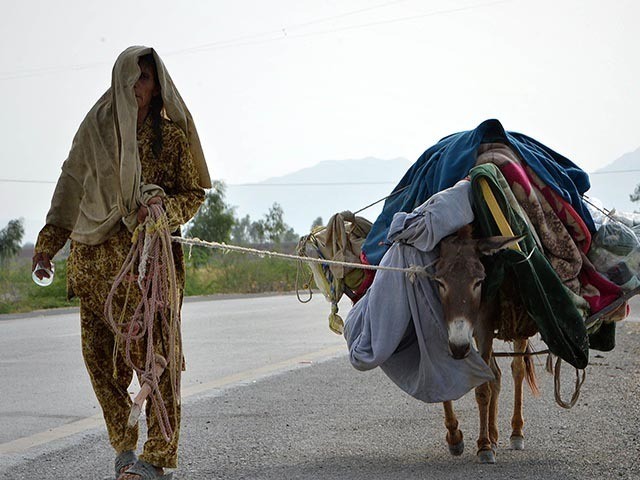 The lack of health facilities and the disruption of education seem to be the glaring issues internally displaced persons (IDPs) are grappling with. However, multiple reports of criminal incidents, security hazards and child recruitment have surfaced in a government report, which reveals these gruelling eventualities, among others.

Nearly a million IDPs from North Waziristan were registered in Bannu and Peshawar as the military offensive, Operation Zarb-e-Azb, began June 15 in the tribal agency. Families left their homes so that terrorists could be eradicated, but the camps – their temporary abode – do not even provide the basic facilities to them. But the picture is far darker than what appears. A report titled Multi-Clustered Initial Rapid Assessment (MIRA) Bannu Report, a copy of which is available with The Express Tribune, outlines major shortcomings in the arrangement made to cater to the needs of the displaced. It also reveals how demographic changes have altered the way of life for not only the displaced, but host communities as well.

The MIRA Bannu report has been compiled by the cluster members of the Provincial Disaster Management Authority (PDMA) and concentrates on Bannu district, which serves as a base for 80% of the 53,000 displaced families verified by the National Database and Registration Authority (NADRA). A majority of them are not living in camps because of cultural values and fear threats from militants as the camps are close to North Waziristan, according to the report.

Data from the Department of Education indicates that there are 1,430 schools in Bannu, of which 48% are girls’ schools. Over 80% of schools in Bannu are currently occupied by displaced families, with 51,803 adults and 22,178 children (43%). Meanwhile, the 102 schools in Frontier Region (FR) Bannu are also sheltering IDPs, an official of the Fata Disaster Management Authority (FDMA) told The Express Tribune. Families occupying schools have been asked to vacate them before the new academic year begins on September 1.

However, the government document reveals that “only 5% of the families have a source of income, while 95% of the families have no income”, and only 2% of those living in Bannu plan to leave the district – the IDPs have rejected the idea of leaving the schools as they have no other place to go. “The government plans to pay them house rent,” the senior official assured, adding “but the problem persists only in Bannu district, as schools in FR are mostly ghost schools.”

A troubling statistic highlighted in the report is that 98.7 % girls and 97.9 % boys are not going to school after their displacement from the North Waziristan.

The biggest challenge and a cause of frustration for the displaced communities is the lack of documentation, particularly those households that are headed by women.  At least 31% of the participants, according to the report, believe that not having national identification cards is a “major barrier” for receiving assistance. To make matters worse, they witnessed political interference during the distribution of aid and tribal elders prohibited women from going to distribution points.

Away from militancy, close to crime

Although they fled from an area flooded with militants, as many as 38% of the people still fear security risks. When respondents were asked what their major concern was and what incidents had occurred, the most common answer was criminal acts (37%), such as theft, robbery, and injury and physical assault. Meanwhile, for women surveyed ,“threat/extortion/harassment by authorities” was the response when they were asked the same question, said the report.

Child recruitment is another grave concern highlighted in the report, which asks for further enquiry into the issue. “At least 7% of the respondents reported that child recruitment” had occurred. This is a significant child protection concern and it requires urgent in-depth analysis since this assessment (report) did not manage to capture further information whether this occurred in their places of origin or displacement and who were the actors involved.”

Fatal collision: Six of a family die in road crash