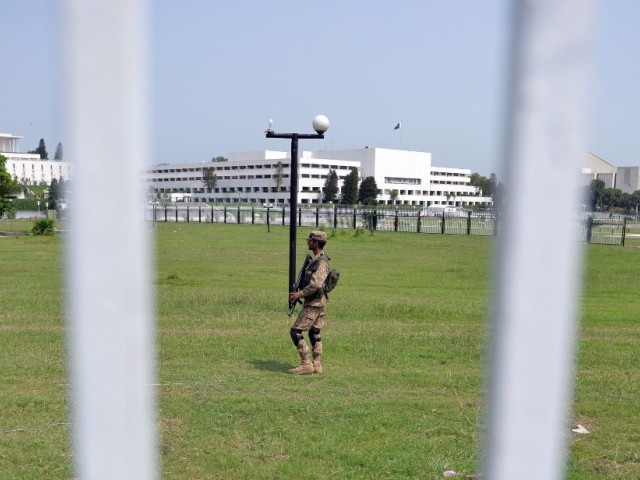 Pakistani soldiers patrol on the premises of Presidential Palace in Islamabad on August 23, 2014. PHOTO: AFP

The government on Saturday night decided to double security in Islamabad’s Red Zone where Pakistan Tehreek-e-Insaf (PTI) and Pakistan Awami Tehreek (PAT) are staging sit-in protests with thousands of their supporters.

“The interior minister has given directions to double security forces’ presence in the Red Zone,” a government spokesperson said in a text message sent to reporters. “The directions have been given to prevent any terror attack and to counter any possible adventure by the two [protesting] parties,” the spokesperson added.

Earlier in the day, PAT chief Dr Tahirul Qadri expressed concern regarding a possible terrorist attack on his supporters. He, however, accused the government of sending terrorists to the Red Zone in a bid to scare protesters away from the area.

The government has deployed more than 30,000 officials from law enforcement and security agencies in the Red Zone. Police, Rangers and the army have been deployed to provide three-tier security in the highly sensitive area.

Meanwhile, a spokesperson for Prime Minister Nawaz Sharif refuted speculation that the federal government was about to make abrupt changes in some institutions.

“…we clarify that all such reports are false and baseless and are only meant to create confusion and instability in the country,” the spokesperson said.