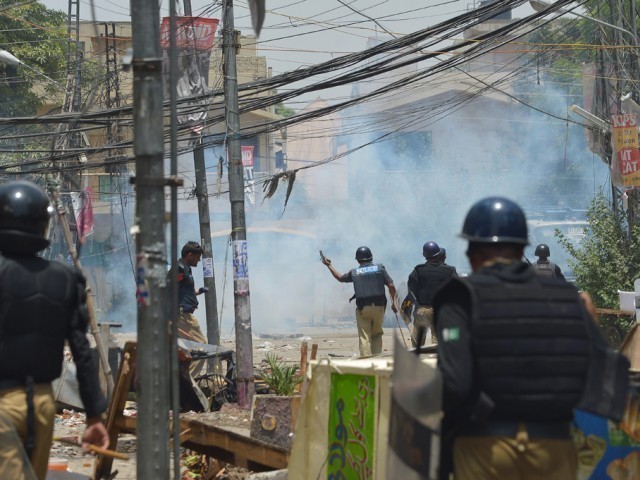 An additional district and sessions court on Saturday directed the police to register an FIR against the prime minister, Punjab chief minister, deputy inspector general of police operations and 18 others, including politicians and police officials, in the deaths of 14 Pakistan Awami Tehreek activists in June. The party workers clashed with police outside the Minhajul Quran International Secretariat in Model Town on June 17.

Judge Raja Muhammad Ajmal Khan ordered SHO Faisal Town to register the FIR after petitioner’s counsel Mansoorur Rehman Khan Afridi claimed the Joint Investigation Team’s report is being concealed by the Punjab government. Afridi challenged police officials’ claims that they had been injured during the incident.

While footage of Gullu Butt smashing the window panes of vehicles outside the secretariat was aired on television, the JIT report did not mention the vandalism in its report. “The Punjab government has posted a ‘Gullu Butt’ in each department,” Afridi said.

District public prosecutor Malik Azhar argued that PAT workers should have cooperated with the JIT investigation and recorded their statements, instead of ignoring repeated requests to appear before the judicial tribunal. He claimed that PAT workers used tear gas against the police.

During previous proceedings, the judge sought a progress report from the JIT; he was informed that on July 5, 690 police officials joined an investigation into the incident in Model Town. The petitioner, Director Administration Minhaj-ul-Quran International Muhammad Jawad Hamid, had claimed that the police seemed reluctant to register a case against those accused by the PAT. Hamid claimed that on the night of June 16, he was present at the secretariat along with Hafiz Muhammad Waqas and Muhammad Tayyab Zia Noorani when he discovered a large number of police personnel stationed outside Dr Qadri’s residence, armed with weapons and bringing bulldozers and cranes with them.

Jabbar informed them that roadblocks and security barriers placed here would be removed. “He said he had strict orders from Punjab CM Shahbaz Sharif and Law Minister Rana Sanaullah,” Hamid said.

“When we protested against the highhandedness of the police officials, Jabbar ordered the officials to shell and fire at the main gate of the residence. They started breaking roadblocks placed there on the orders of the court more than four years ago,” Hamid said.

Hamid claimed that some female PAT women stood in front of Qadri’s residence, even as Jabbar ordered cranes and bulldozers to move forward. Jabbar counted to three before he ordered officials to open fire on the women, Hamid said, and two women – Tanzeela Amjad and Shazia Murtaza – were shot. Hamid said more than 100 people were injured in the subsequent firing and 14 succumbed to their injuries.

No order to register case against PM, CM: Rashid

Information Minister Pervaiz Rashid on Saturday denied the Lahore Sessions Court had issued an order to the police to register an FIR against PM Nawaz and Shahbaz Sharif.

In an official statement, he said the court, while disposing of Minhajul Quran petition, had asked police to deal with the matter ‘according law and procedure’. “This decision of the court does not mean that it ordered the registration of any case against anyone,” he said.