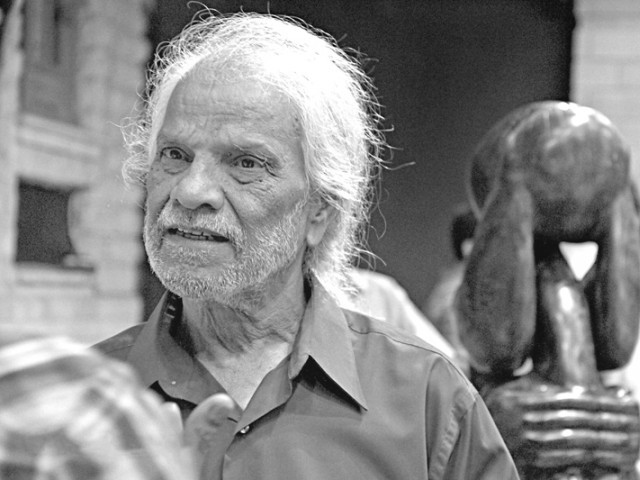 KARACHI: An artist communicates through his art and for one of Pakistan’s ‘original’ sculptors, Shahid Sajjad, who passed away on Monday, his communication with the world will continue through his sculptures.

Sajjad’s work is now on display at the Maritime Museum in Karachi and at the Armed Corps division headquarters in Nowshera. The award-winning sculptor was a founding member of the Indus Valley School of Art and Architecture and one of the pioneers of the field in Pakistan. He passed away on Monday at the age of 77 and leaves behind a wife and two children.

His son, Sibte, told The Express Tribune, that his father, despite battling illness for a long time, was living his life to the full till the very end.

Sajjad was born in Muzaffarnagar, Uttar Pradesh, in 1937. He started his journey into art with calligraphy before turning to commercial art and film-making; a path that led him to become art director at an advertising agency in Karachi.

His first ‘art pilgrimage’ was into the Chittagong Hill Tracts in 1965, where he lived with the local ‘Chakma’ people. In an interview with NuktaArt magazine, Sajjad recalled that ‘the sense of purity and clarity of the tribal craftsmen’ in the jungles of what was then East Pakistan, had appealed to his primitive side.

In 1971, he gave up his comfortable life and took to riding through Europe and Asia on his motorcycle for what was his second ‘art pilgrimage’. Over the next three years, he sought out the best of art that the world had to offer, a journey that took him from Paris to Japan; drawing inspiration from the likes of Rodin, Paul Gauguin and Henry Moore, and learning secrets of the crafts from Japanese sculptors.

He returned to Karachi and started transforming logs of wood and blocks of bronze into pieces that have a ‘memory and respond’.

One of his most iconic works, ‘Guardian of the Seas’, is now on display at the Maritime Museum. “His work should remain in the public sphere, and this kind of work, anywhere in the world, is very difficult to retain,” said Sibte. “We are very interested in keeping his work on display at public spaces.”

Artists mourn loss of a pioneer

The news of Sajjad’s demise shocked the art community. Artist Abdul Jabbar Gul, also a sculptor, recalled his long association with Sajjad. “He was a genuine artist and his contribution to sculpture in Pakistan is unmatchable,” said Gul. “This is a huge loss to the entire art community.”

Art critic Nilofer Farrukh said that Sajjad had kept sculpture alive in the country during the most difficult of times, when figurative art and the three dimensional figures were considered taboo. “It is because of him that we have works that young sculptors can be inspired by,” she said. “He was a man of tremendous commitment to his art and integrity.”

Nilofer added that Sajjad, a proponent of the ‘lost wax’ technique, leaves behind an unforgettable legacy, both as a human being and as an artist. “Pakistan is lucky for being able to call him one of its own,” she said. “With his death, an entire era has come to a close; the era of pioneers.”