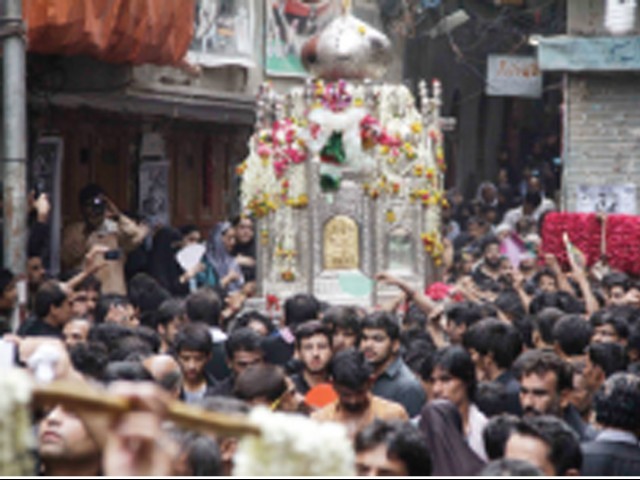 Youm-i-Ali, the day of martyrdom of Ali ibn Abi Talib (RA), was observed with traditional zeal on Sunday amid tight security. Around 400 mourning processions, other than the main procession, were taken out from various localities. They concluded peacefully in the evening with no untoward incidents reported.

Thousands participated in the main procession that was taken out from Mubarik Haveli, Mochi Gate, on Sunday morning. The procession passed through Bazaar Hakiman, Paniwala Talab, Rang Mahal, and Bhati Chowk and ended at Karbala Gamay Shah in the evening.

Hundreds of mourners at the procession flagellated themselves with chains (zanjir-zani) and beat their chests while chanting “Ya Hussain, Ya Ali”. Mourners recited nohas and marsiyas to commemorate the day of Hazrat Ali’s (RA) martyrdom. Several scholars and orators shed light on the sacrifices rendered by Hazrat Ali (RA).

Allama Muhammad Abbas Rizvi addressed a gathering of over 10,000 mourners at the majlis. He shed light on the services and sacrifices of Hazrat Ali (RA), his family and companions.

The procession stopped for a zanjir-zani session at Fazl-i-Haq Chowk.

Muhammad Ali Jafari, one of the mourners, said he expressed his love for Hazrat Ali (RA) by performing zanjeer-zani each year.

Salik Raza Kazmi, one of the mourners who held up the traditional zareeh – a metallic model of Hazrat Ali’s shrine – told The Express Tribune that they prepared the zareeh and carried it at the procession to symbolise Hazrat Ali’s (RA) martyrdom…“this is our tribute to him”.

The procession stopped for a majlis at Chowk Nawab Sahib at around 1pm and then proceeded to Chohatta Mufti Baqar and Purani Kotwali.

At sunset, around 500 mourners participated in zanjeer-zani at Bhati Chowk. Several groups including Ali Haq, Sipah-i-Abbas, Aseeran-i-Shaam and Katri Bawa of Chuna Mandi performed self flagellation at Bhati Gate.

Sarmad Shah, one of the mourners, said that Hazrat Ali’s (RA) martyrdom taught Muslims to stand up for truth.

Control rooms were also set up by the city police. The administrations of Imambargahs also deputed their own security personnel to assist the police. The Bomb Disposal Squad and Rescue-1122 personnel were placed on high alert till the processions ended.

The Punjab Metro Bus Authority suspended its route ahead of MAO College till Shahdara in view of Youm-i-Ali on Sunday. The 27 kilometre route starting from Gajju Matta and ending at Shahdara was shortened to 22km till MAO College on Sunday.