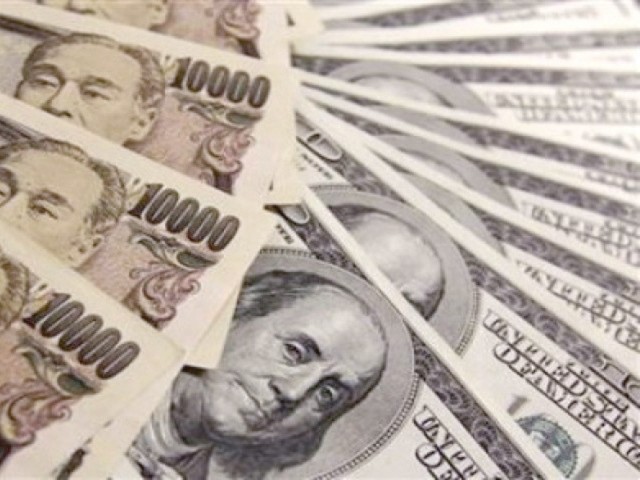 SBP-held foreign exchange reserves dipped quickly, which was followed by a swift recovery, in the last fiscal year. PHOTO: FILE

Foreign exchange reserves held by the State Bank of Pakistan (SBP) stood at $9,602 million on July 4 after registering an increase of 6.2% over the preceding week, data released by the central bank showed.

The increase is attributed to receipts of $556 million from the International Monetary Fund (IMF) under the Extended Fund Facility (EFF), according to an SBP statement. During the week ending on July 4, the SBP made payments of $78 million from its reserves on account of external debt servicing and other official payments.

SBP-held foreign exchange reserves dipped quickly, which was followed by a swift recovery, in the last fiscal year. On a year-on-year basis, they increased more than 50% in 2013-14. The drop was rather significant in the first half of the last fiscal year, as the central bank’s reserves decreased to less than $3.2 billion by the end of January, which translates into the import cover of less than one month. The plunge prompted international financial institutions to raise the red flag, resulting in a series of actions from the finance ministry, which ultimately strengthened SBP-held foreign exchange reserves.

Although the SBP-held foreign exchange reserves increased dramatically in the last fiscal year, the IMF believes they remain at low levels and that the central bank should continue its efforts until reserves ‘comfortably exceed’ three months of import cover. “Greater willingness to accommodate downward exchange rate flexibility could play an important role in accelerated reserves accumulation while helping boost exports over time,” the international lender wrote in its third review of the Extended Arrangement under the Extended Fund Facility (EFF).

While referring to the grant from Saudi Arabia totalling $1.5 billion and the Eurobond issue ($2 billion), the IMF suggested that the SBP should “not bet on one-off inflows” – such as grants and privatisation receipts – and instead align monetary and exchange rate policy to further boost reserves.

According to the IMF, the SBP believes the current account deficit is low and the main deterrent to private inflows is not the interest rate. While the current account deficit increased by 3% year-on-year in the first 11 months of 2013-14, foreign direct investment (FDI) that Pakistan received over the same period amounted to $1.36 billion. It was up 2.5% from the amount received under the same head during the comparable period of the preceding fiscal year.