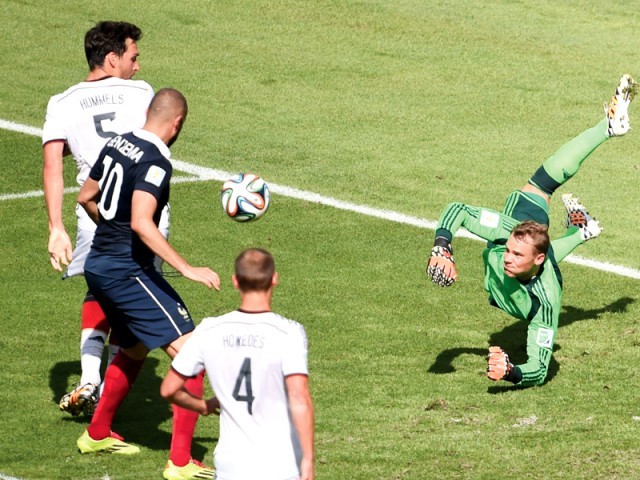 Hummels produced a man-of-the-match display on his return to the side after missing Monday’s nervous 2-1 extra-time win over Algeria with flu.

But Neuer played a huge part in the victory with an outstanding display, on what was his 50th appearance for his country, to repeatedly thwart the French attack, spearheaded by Real Madrid striker Karim Benzema.

The Bayern Munich goalkeeper said his back four had raised their game significantly since Monday’s below-par display.

“Unlike against Algeria, today [Friday] we had a game where we couldn’t lose, the defence did well and was really compact,” said Neuer, who denied Benzema with a key save in the dying stages.

“It was very impressive to play in this stadium against France and this performance was already worthy of a semi-final.

“We played some good football and there is huge joy now in reaching the semi-finals.”

German coach Joachim Loew said Neuer is key to Germany’s success in Brazil as they look to end their 24-year wait for a World Cup title.

“Confidence in Neuer doesn’t just come from me, it comes from the whole team,” said the 54-year-old.

“It’s a really great feeling for defenders to know that he is good both in and outside the box, knowing he has the skills of a good outfield player.

“Since 2010, he has been among the best in the world, if not the best. He’s so cool and calm that he gives confidence to the players in front of him.”

France coach Didier Deschamps is confident his side can learn the harsh lessons from World Cup heartache as they target success at the 2016 European Championship on home soil.

While Deschamps was dismayed at France’s ‘timid’ start to the match, he leaves Brazil confident that the squad has a bright future.

Deschamps has transformed France’s fortunes over the last eight months since the remarkable 3-0 victory against Ukraine that overturned a 2-0 first-leg deficit in the decisive play-off to qualify for the World Cup.

“There is a group that was born when we qualified with the play-off win against Ukraine,” said Deschamps. “I am proud of what the players have done on and off the field.

“There is work to be done, but the materials are there. We need to maintain the same quality and the same spirit. I prefer to take away the positives that there have been since our arrival in Brazil.”