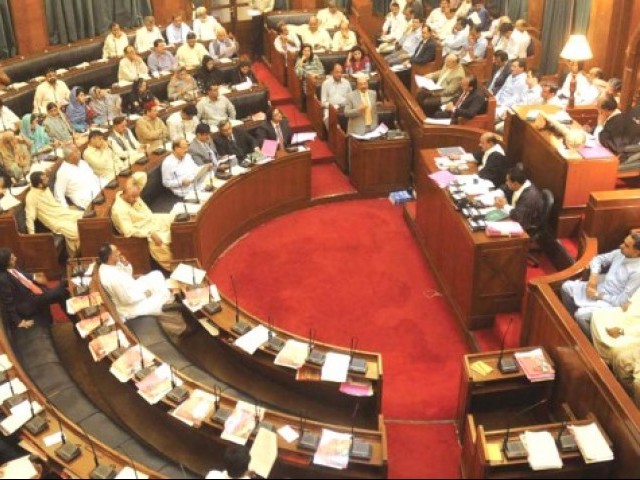 KARACHI: Cases of honour killings, such as karo-kari, will now be dealt with under Section 302 of the Pakistan Penal Code (PPC) after a resolution was passed in the Sindh Assembly on Friday.

The session on Friday started at 10 am with Deputy Speaker Shahla Raza in chair. Speaker Nisar Ahmed Khuhro joined the proceedings after an hour as he was out of the country.

Mughal said that an increasing number of women are declared ‘kari’ and are being killed yet the culprits are released from custody after a short span of time. “The main reason behind the killings of women is property and tribal feuds,” she said. Mughal believed that the culprits should be given capital punishment under Section 302 since they commit such a heinous crime.

Meanwhile, Alwani believed that cases of target killings should be registered against those who kill women in the name of honour because they plan these murders. She added that honour killings take place with the help of the police, who deliberately frame weak charges against the suspects and make sure that they get bailed from the court. “I will suggest ‘capital punishment’ for those who kill a woman on the pretext of karo-kari,” Alwani said.

The deputy speaker agreed that the police are well aware of who the real culprits are. She suggested reforms in the police department and the establishment of a women’s desk in every police station so that a female constable can address such issues. Even though anti karo-kari cells have been established with the help of the UNDP, honour killings are as frequent as ever, she added.

Home Minister Dr Zulfiqar Mirza also gave an emotional speech on honour killings in which he drew similarities between women and “a university”. “A woman teaches everyone how to spend their life yet we kill them because they are weak,” he said.

Investigations reveal that honour killings are just a form of revenge and therefore just a matter of “ego”, Mirza said. The entire society needs to unite to end this menace, he added.

The law minister, Ayaz Soomro, created some confusion when he pointed out that murder cases, including karo-kari, are already charged under Section 302. At this point, Minister for Katchi Abadis Rafique Engineer said that since witness accounts are needed in such cases, they usually work in the favour of the culprits. Khuhro agreed that an amendment is needed in the resolution, yet it was passed unanimously when he put it forward.

In the point of order, leader of opposition Jam Madad Ali raised the issue of City District Government Karachi officials charging tax on sacrificial animals coming from other areas of Sindh.

“Five hundred rupees are being charged on each animal,” he informed the House. “If the trader refuses, the officials threaten to impose a penalty of an additional 11 per cent,” he added.

It turns out that the contract is currently being handled by a man named Gilani, who is believed to be a nephew of the Sindh chief minister (CM), said Ali. The speaker requested him not to accuse anyone before proper investigations.

“My employees, who were carrying animals, have also paid the tax to people who claimed that they are being led by the CM’s nephew,” he insisted. Minister for Local Bodies Agha Siraj Durrani said that he will conduct an inquiry and suspend those people found responsible.

Attendance issues during the session

When the session started at 10 am after only a 30-minute delay, most legislators were absent. The attendance register was placed right in front of the speaker’s chair and all members had to sign it upon their arrival.

The House broke into applause when PPP MPA Sardar Jam Tamachi Unar walked into the session at 11 am, even though he had complained about late comers in the previous session. Khuhro announced that even ministers will have to sign the attendance register, after PPP legislator Ali Nawaz Chandio pointed out that ministers are being exempted.

MPA Sharjeel Inam Memon recalled that the assembly had passed a resolution to establish a biometric attendance system in all government offices. The same system should be installed in the assembly to record the times at which members come in and leave the session, he added. The speaker adjourned the session till Monday.

Govt agrees to bring Haji Lalu back to Karachi prison