Faiz: Letters to the beloved

Faiz: Letters to the beloved

With an impris­oned body and libera­ted soul, Faiz’s carcer­al stay became a medium of cathar­tic expres­sion for his wife.
By Saadia Qamar
Published: July 2, 2014
Tweet Email 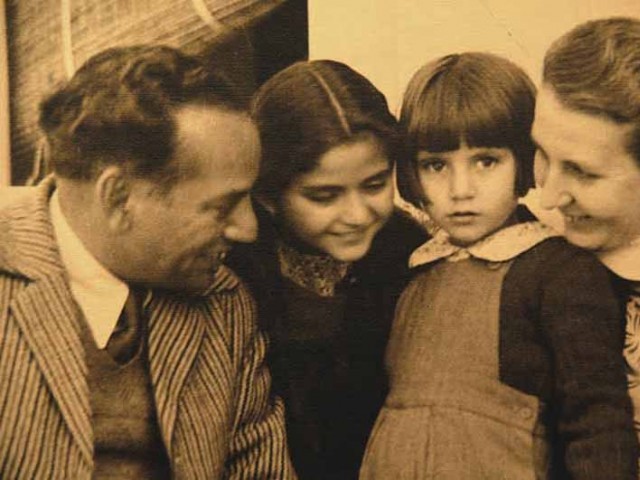 In a letter, Faiz shares that regardless of the inevitable hardship, he smiled when he looked at the picture of Alys and their two little girls, Salima and Moneeza. PHOTOS: SKYSCRAPERCITY.COM/FLICKR.COM

Denounced for preaching nonconformist ideas, legendary poet Faiz Ahmed Faiz was convicted under the Rawalpindi Conspiracy (Special Tribunal) Act 1951. But with an imprisoned body and a liberated soul, his carceral stay became a medium of cathartic expression for his wife, British-born writer Alys Faiz.

What followed was correspondence letters between him and his beloved, a selection of which were recently read at an event titled ‘Dhal Gaya Hijr Ka Din: Letters by Faiz and Alys’. Backed by Zambeel Dramatic Readings, the event took place at T2F, with Khalid Ahmad lending voice to the letters in Urdu and Nimra Bucha, in English. During his days in prison, Faiz fed his loneliness with the propinquity he shared with his wife. Sustaining the “waves of pain each time [he] remember[ed] this separation from [his] lover,” (A Prison Evening/Zindan Ki Aik Shaam), he didn’t winnow out the possibility of meeting his wife on the other side of the fence.

Faiz’s letters have been published under the name, ‘Saleebain Meray Dareechay Mein’ and the ones written by Alys have been titled ‘Dear heart: To Faiz in prison’. There is anguish and fear in the initial letters that Alys writes to Faiz. In some instances, it seems like she would lose hope in what was a marriage between a British lady and a Pakistani poet. But Faiz keeps the hope alive; she finds succour in him and turns to him to gain fortitude. For Faiz, it is all about forgiving follies of the past and cherishing the little moments in life.

He begins the first correspondence with his wife through a letter, where he recounts being at loss of appetite despite being served a sumptuous meal on the train ride to the prison. Of his first day in prison, he shares that regardless of the inevitable hardship, he smiled when he looked at the picture of Alys and their two little girls, Salima and Moneeza.

The letters comprise a myriad of varied discussions between the two. In one, Alys writes to Faiz that she keeps busy with the children, who are growing up, and that Cheemi (Salima) remembers what Faiz looks like, but Meezu (Muneeza) only remembers his voice. Faiz expresses worry over the fact that Alys is alone in facing the troubles coming the family’s way. For Alys, being kept apart from Faiz was the bedrock of “poignant memories.” In one of her letters, she acknowledges the journalistic community for expressing solidarity with her and Faiz’s cause and standing up for freedom of expression. In another, she colloquially says she hoped she was an Eskimo than stay in Lahore in the boiling summer heat. Towards the end, the correspondence reflects hope – hope, which springs towards the joy of meeting again. Wishing each other on their anniversary, birthdays and new year, hoping that it would mark an end to their sorrow and separation. In a few letters, Faiz talks about his jail surroundings and interaction with fellow inmates. Interestingly, he also writes about a young bird that flew down to the prison toilet. Although it was rescued, it couldn’t fly out of the jail as it had wounded its legs. He further explains how the bird is confined to a corner of the garden, scorned by other birds for losing its fundamental ability to fly. Did the state of the bird reflect Faiz’s own state of mind? Possibly.

About being given the chance to read out Faiz’s letters, Khalid says, “Bohat acha laga. Likhne ka tarz aisa hai ke aagay le kar chalta hai aur usshi main daul jaata hai.” (I felt really good. His way of writing is such that it moves forward and flows smoothly itself.) Nimra shares, “I am thrilled that I was asked to read out the text. Sadly, these days, people don’t read and it is essential to [carry out such readings].”