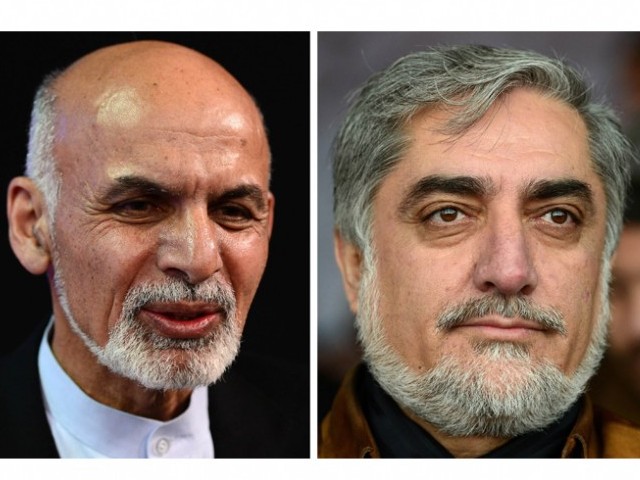 KABUL: Afghanistan’s rival presidential candidates ratcheted up tensions Monday ahead of the release of results, with one campaign team preparing for victory and the other rejecting the count in a dispute that could trigger instability.

The United Nations (UN) and donor countries have been trying for months to prevent a contested election outcome, fearing political deadlock and ethnic violence as US-led troops withdraw from the country.

But with the two candidates at loggerheads, Wednesday’s preliminary results look set to tip Afghanistan into a risky period of street protests and uncertainty.

The election crisis comes as Taliban insurgents launched a major offensive in southern Afghanistan in a sign of the challenges that Afghan security forces face with declining Nato military support.

Abdullah Abdullah, previously seen as the poll front-runner, has boycotted the election process over “blatant fraud” — to the dismay of officials and diplomats keen for Afghanistan’s first democratic transfer of power to go smoothly.

“We have no more trust in the commission or its employees,” Javed Faisal, a spokesperson for Abdullah, told AFP. “Whatever they announce (on Wednesday) will not be legal.”

Faisal said Abdullah’s campaign team did not support violence, but added “we will defend our votes, we will demand justice”.

Abdullah, a former foreign minister, believes fraud denied him victory in the 2009 election and has vowed not to back down in the clash over alleged ballot-box stuffing in this election.

In contrast, Ashraf Ghani says he is 1.3 million votes ahead in the vote count and has called on the election commission to ignore Abdullah’s complaints.

Ghani’s campaign said the election had been clean and their candidate had pulled in votes across ethnic lines.

“The election commission’s announcement will be made after very meticulous calculations under the observation of the international community,” spokesperson Daud Sultanzoy told AFP.

“We will welcome the results, which will create a new opportunity for the Afghan people, uncertainties will be removed and people will breathe a sigh of relief.”

When a new president comes to power, fostering peace will be high on the agenda after a bloody 13-year Taliban insurgency against US-led troops and the Kabul government.

The insurgents have recently taken ground in the southern province of Helmand after 800 fighters launched coordinated attacks ten days ago.

Afghan army and police reinforcements have been sent to re-take territory in the hotbed district of Sangin.

Ahead of Wednesday’s results, the Independent Election Commission (IEC) called for Abdullah to end his boycott.

“We have used all possible means to get Dr. Abdullah to rejoin,” spokesperson Noor Mohammad Noor told reporters.

“The IEC hopes the announcement of the results causes no negative reactions.”

Noor added that the IEC had met with outgoing President Hamid Karzai to ask him to help break the impasse, but without apparent success.

Karzai, who has ruled since the fall of the Taliban regime in 2001, is constitutionally barred from a third term in office.

He has not publicly endorsed either candidate and has vowed to oversee a legitimate election — a key benchmark of the massive military and civilian aid effort to develop Afghanistan after the Taliban era.

Several thousand Abdullah supporters held a large rally in Kabul on Friday and further protests are planned on the eve of the results announcement.

Any clashes between supporters could ignite ethnic unrest as Ghani attracts much of his support from the Pashtun tribes of the south and east, while Abdullah’s loyalists are Tajiks and other northern Afghan groups.

The UN has expressed its concerns over rising friction and last week called on candidates and their supporters to “refrain from any acts that incite imminent violence, civil disorder or lead to instability”.

Abdullah, a former anti-Taliban resistance fighter, alleges that the turnout figure of over seven million in the runoff was exaggerated and that in several provinces there were more votes than eligible voters.

The vote was held after the two came first and second in an eight-man election on April 5, when Abdullah was far ahead with 45% against Ghani’ 31.6%.

Wednesday’s preliminary result will be followed by three weeks of adjudication of complaints, with the final result due on July 22.