Iraq troops advance on Tikrit in biggest fight back yet

Iraq troops advance on Tikrit in biggest fight back yet 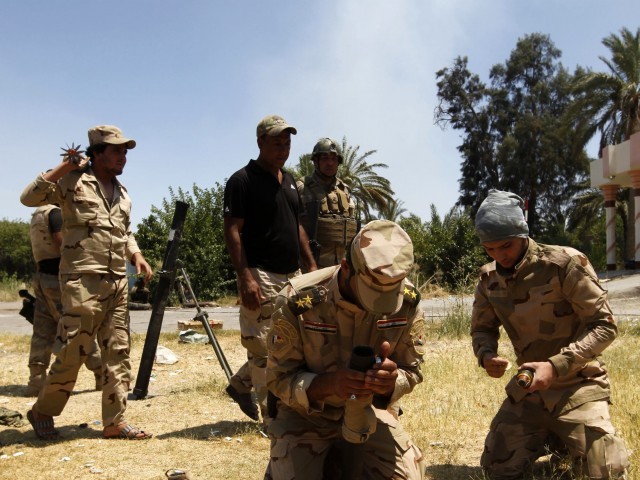 Members of the Iraqi security forces prepare to load a mortar during clashes with fighters. PHOTO: REUTERS

BAGHDAD: Iraqi troops advanced towards Tikrit on Saturday pounding insurgent positions in the city with air strikes in their biggest counter-offensive so far against Sunni militants.

A senior officer said the army was coordinating its efforts with the United States, which has deployed military advisers to help the government push back the militants who have overrun large areas of northern and north-central Iraq.

Armed US drones were flying over Baghdad to provide protection for the advisers and US diplomats against the militants, led by the Islamic State of Iraq and the Levant (ISIL).

Top Shia cleric Grand Ayatollah Ali al-Sistani, who is revered among Iraq’s majority community, has urged political leaders to unite and form a new government within days to tackle the crisis.

International agencies have raised alarm bells over the humanitarian consequences of the fighting, with up to 10,000 people having fled a northern Christian town in recent days and 1.2 million displaced by unrest in Iraq this year.

“ISIL fighters now have two choices — flee or be killed,” he boasted.

On Thursday, troops swooped into a strategically located university campus in the city by helicopter, with sporadic clashes reported throughout Friday.

Taking the university is seen as an important step towards regaining control of Tikrit, one of the biggest cities controlled by the militants.

They were also now in full control of a key road from Baghdad to Samarra, between the capital and Tikrit, Lieutenant General Qassem Atta added.

There is coordination with the US “in the field of studying important targets,” Atta said, without providing further details.

Although they initially wilted in the face of the offensive in majority Sunni Arab areas north and west of Baghdad, the security forces have appeared to perform more capably in recent days.

A senior US official, speaking on condition of anonymity, said “a few” armed drones were being used over Baghdad as a precaution to safeguard Americans, but they will not be used for offensive action against the militants.

The Pentagon confirmed that among the manned and unmanned US aircraft flying over Iraq to carry out surveillance, some were carrying bombs and missiles.

The US flights come despite Maliki’s insistence on Friday that “Baghdad is safe” from militant assault.

The prime minister was backed in that view by retired US general James Conway, who said that “the worst is over” in the offensive, as the Sunni Arab militants would not be able to penetrate Baghdad or the predominantly Shia Arab south or Kurdish north.

World leaders have insisted that a political settlement be reached between Iraq’s Shia Arab, Sunni Arab and Kurdish communities alongside military action.

Maliki, who has publicly focused on a military response to the crisis, has acknowledged that political measures are also necessary.

Iraq has appealed for US air strikes against the militants, but Washington has offered only up to 300 military advisers.

US officials have said that a $500 million plan to arm and train moderate rebels in neighbouring Syria could also help Iraq’s fight against ISIL, which operates on both sides of the border.

But amid calls for unity, Iraqi Kurdish leader Massud Barzani said Baghdad could no longer object to Kurdish self-rule in Kirkuk and other towns from which federal forces withdrew in the face of the militant advance.

Maliki’s security spokesman has said hundreds of soldiers have been killed since the offensive began on June 9, while the UN puts the overall death toll at nearly 1,100.

The International Organisation for Migration warned that aid workers could not reach tens of thousands of Iraqis displaced by the violence, and called for humanitarian corridors to be established.