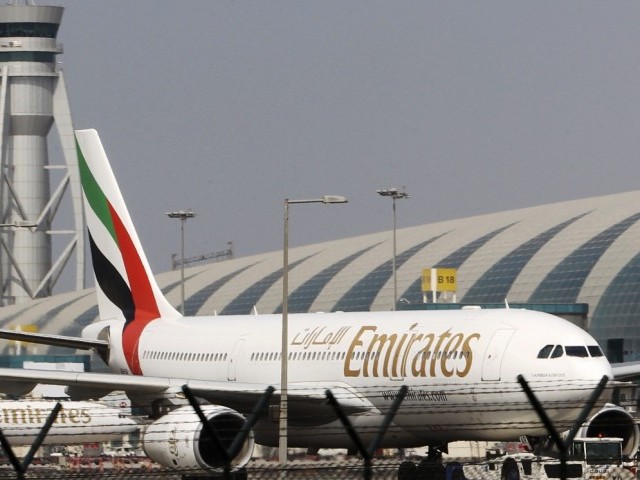 Emirates said on Wednesday that it was suspending flights to and from Peshawar, just hours after bullets pierced through a Pakistan International Airlines (PIA) plane near the airport, killing one female passenger.

The Dubai-based airline said flights have been suspended from June 25 until further notice due to the security situation at the Peshawar airport.

“Passengers booked to travel between June 25 and 27 can cancel their booking, rebook to travel at a later date, or fly to another Emirates destination in Pakistan,” the airline said in a brief statement on its website.

Etihad Airways also suspended one of its Abu Dhabi to Peshawar flight on Wednesday citing security concerns. “The airline’s next flight to Peshawar, scheduled to depart from Abu Dhabi on Thursday night, June 26, is still under review.”

Senior CAA, security and administration officials were busy in a meeting late into the evening to discuss what measures could be taken to beef up monitoring around the airport.

A similar suspension followed a militant attack on the Peshawar airport in 2012 when besides Emirates, all Middle East carriers, including Qatar and Etihad Airways, had stopped their flights.

Pakistan’s Civil Aviation Authority (CAA) has allowed Emirates to operate additional flights to Islamabad to facilitate its passengers, a senior official of the aviation regulator told The Express Tribune.

“The last time these airlines stopped coming to Peshawar, the operations remained suspended for one month. We are not sure how long this latest episode will continue,” he said.

The CAA has come under immense pressure since the ferocious attempt by armed militants to take over Karachi airport ended in the death of over two dozen people and pushed a leading airline to roll back operations to Pakistan.

Hong Kong-based Cathay Pacific has already announced that its flight taking off from Karachi on June 29 would be the last, more than 13 years after it started flying to Pakistan.

Leading airlines, including British Airways, Singapore Airlines, Lufthansa and Malaysian Airlines, have scaled back their operations since 2012 in part due to concerns related to the security of their employees.

The gun attack on PIA aircraft so near the runway is of particular concern especially when congested residential colonies have sprouted up around Peshawar, Karachi and Lahore airports.

“This was not the first time bullets were fired upon on a landing plane at the Peshawar airport,” said CAA officials. “Pilots have reported similar incidents before.”

“It is very important for us to realise the fact that our pilot didn’t lose his nerves,” he said. “Things could have gone horribly wrong if the firing incident had confused him.”