Five ‘Uzbek’ attack­ers killed after being pinned down by securi­ty forces near the airpor­t.
By Riaz Ahmad
Published: December 17, 2012
Tweet Email 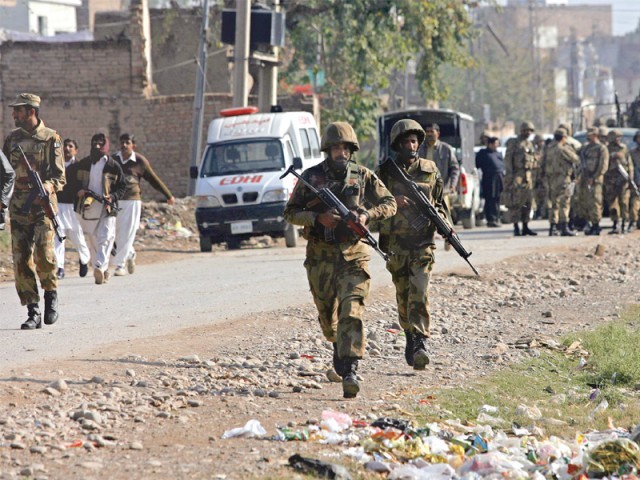 Army troops race to take positions during a gunfight with Taliban militants in Peshawar on Sunday. PHOTO: AFP

Five Uzbek militants, who fled the deadly Taliban raid on Peshawar airport and took refuge in a nearby village, were killed as police backed by army commandos launched a raid early Sunday to clear an under-construction building where the militants were holed up.

Fierce firing broke out after police, acting on an intelligence report, stormed the building near the airport, with police and army commandos battling militants armed with automatic weapons, grenades and mortars.

All five militants who were holed up in two buildings in Pawaka village were killed by Sunday afternoon. A police commando was also killed, while two policemen were injured during the operation.

According to a military version, five terrorists – who appeared to be Uzbek nationals – had been killed on Saturday: three during a firefight with security forces while two suicide bombers blew themselves up as army commandos entered the compound.

The director general of the Inter-Services Public Relations (ISPR), Maj-Gen Asim Saleem Bajwa, also lauded the role of security agencies and civilians who, according to him, provided key information regarding the presence of terrorists in Pawaka area.

“These people had managed to escape from the police cordon last night and have been killed in an operation jointly carried out by police and army commandos,” said Maj Gen Bajwa, adding that two groups were conducting last night’s assault on the airport.

According to a Pakistan Air Force (PAF) statement, five attackers were killed on Saturday and no damage was done to the airbase, which is adjacent to the airport, though Taliban spokesman Ehsanullah Ehsan claimed the assault had damaged “several helicopters and aircraft”. The Taliban normally exaggerate their successes.

“The base is in total control and normal operations have resumed. The security alert was also raised at other PAF bases as well,” said the PAF statement.

Peshawar airport is a joint military-civilian facility. Civil Aviation Authority spokesman Pervez George said the passenger side had reopened after an 18-hour closure and there was no damage to the terminals.

The PAF said Saturday’s attackers used two vehicles rigged with explosives, hand grenades, rocket-propelled grenades and automatic weapons. One vehicle was destroyed and the second badly damaged. Security forces found three suicide jackets near one of the vehicles, it said.

“Security forces, including PAF and army troops who were on full alert, cordoned off the base and effectively repulsed the attack,” it added.

Meanwhile, Taliban spokesman Ehsan said the target was not the airport but the PAF base. “Our target was fighter jets and helicopter gunships and soon we will target them again,” he told AFP by telephone from an undisclosed location.

Peshawar’s Capital City Police Officer Imtiaz Altaf said the terrorists were armed to the teeth. “They had suicide vests, rockets, grenades and automatic rifles,” he said, adding that police had arrested two suspects who were being interrogated.

“In the first explosion in which a suicide bomber rammed his car into the wall of the airport around 50 kg explosive was used. While the explosive in the suicide vests was around 7 kilogrammes each,” said Malik, adding that the militants also had improvised explosive devices.

(WITH ADDITIONAL REPORTING BY KAMRAN YOUSUF IN ISLAMABAD AND AFP)