Lively discus­sions on tax and IDPs marked the first sessio­n in the new assemb­ly buildi­ng.
By Our Correspondent
Published: June 25, 2014
Tweet Email 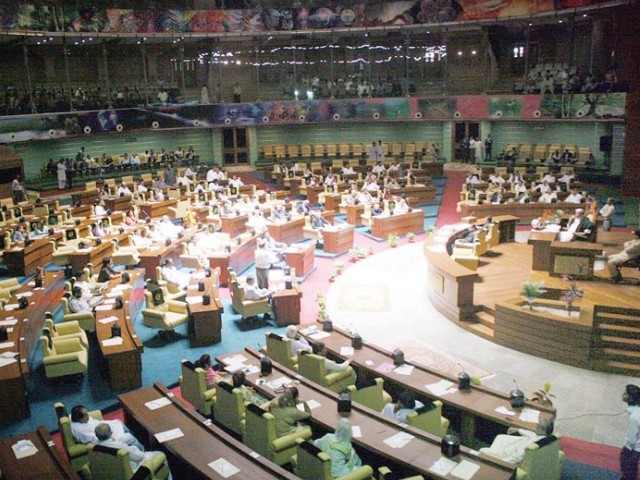 The first session in the new assembly building had an unusually high attendance as most of the MPAs showed up to look at the new building and discuss the budget and other matters. PHOTO: ONLINE

KARACHI: The task of discussing the issues of the province and passing laws may often seem dull and dreary to your average MPA, but the prospect of trying out the comfortable sofas of the new building seemed too good to turn down as most of the seats were occupied; a rare sight in the old assembly building.

The nearly full assembly resulted in a lively session.

A change of hearts for the IDPs

Contrary to earlier claims that there will be no room in Sindh for internally displaced persons (IDPS) from North Waziristan, the provincial government has now claimed that they will welcome them and announced Rs50 million to look after their needs. This was announced by Sindh Chief Minister Qaim Ali Shah while concluding the budget discussion on Tuesday. “We are making extraordinary arrangements at the provincial borders to ensure that no militants enter the province,” he said. “A biometric system is being put in place. The provincial government will stand by the IDPs in their hour of need but those without national identity cards will not be allowed to enter.”

The statement of the chief minister followed Pakistan Peoples Party (PPP) patron-in-chief Bilawal Bhutto Zardari constituting a committee for IDPs, to be headed by the leader of the opposition in the National Assembly, Syed Khursheed Shah.

Earlier, PPP lawmakers had categorically claimed that the Sindh government would not allow the IDPs to enter the province. A few days ago, Sindh Information Minister Sharjeel Inam Memon had said, “We have already suffered a lot after the Swat operation because many terrorists came to Karachi, disguised as its victims. Now, the Punjab and Khyber-Pakhtunkhwa governments should sacrifice and make arrangements for them.”

However, the ruling party now seems to have had a change of heart.

The chief minister, who continued his speech for about two hours, repeated the government’s firm commitment to resolve unemployment by appointing 40,000 people in various departments and acknowledged that there was pressure on his government to impose an agriculture tax. “After consultation with major stakeholders, we are revising the tax on agricultural income and will pass the law in the next session of the assembly,” he said.

Muttahida Qaumi Movement’s Syed Sardar Ahmed opposed certain changes in the tax system, including the increase in stamp duty, property tax, and tax on motorbikes, hospitals and educational institutions. “Around 90% of the taxes are being collected from urban areas,” he claimed. “These taxes should be withdrawn. Reform the agricultural tax and you will earn more than Rs20 billion from the agriculture sector,” he said, adding that the provincial government has allocated Rs9.5 billion for the irrigation department, which barely spent Rs5 billion in the last eleven months.

Earlier, opposition leader Shaharyar Mahar had said that routine crime is more dangerous than terrorism, but unfortunately the provincial government has failed to control both. “An average 18 people are killed in my district every month,” he claimed. “The latest survey reveals that routine killings and crime in rural Sindh is 3% more than in Karachi, but the government has taken no tangible effort to control it.”

He then said that the provincial government was violating the rules by presenting the next fiscal budget and even supplementary budget without consulting the opposition.