Nearly 60,000 acres of govern­ment land has been grabbe­d illega­lly.
By Our Correspondent
Published: June 25, 2014
Tweet Email 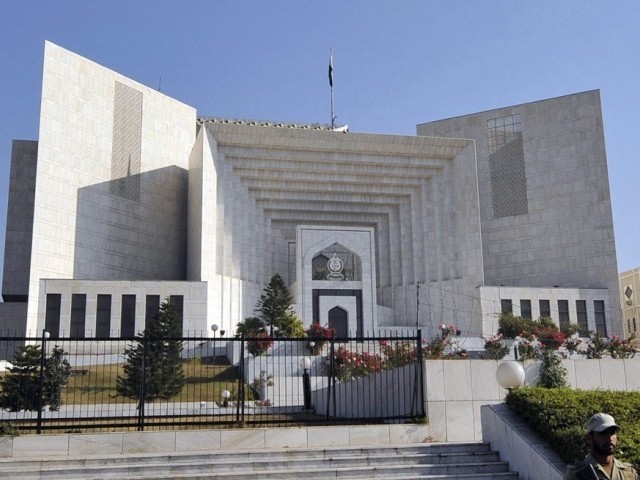 KARACHI: The Supreme Court (SC) set a six-month deadline on Tuesday for the provincial revenue authorities to retrieve thousands of acres of state land that is illegally encroached upon by individuals and institutions in Karachi.

A three-member bench, headed by Chief Justice Tassaduq Hussain Jillani, set the deadline during a hearing of matters related to illegal encroachments upon several prime state lands; one of the major reasons behind the violence in the city.

At the outset of Tuesday’s proceedings, senior members of the Sindh Board of Revenue (BoR) Malik Israr Hussain and BoR Resettlement and Surveys Wing’s Syed Zulfiqar Ali Shah presented a report regarding the total size of government land that has been illegally occupied in the city.

The officers informed that about 59,803 acres and 39 ghuntas have been encroached upon, which include both institutional and individual encroachments. They added that an area of 2,864 acres has been retrieved.

On the court’s query, Shah submitted that institutional encroachment is 52,130 acres and it includes both federal and provincial institutions, including the Defence Housing Authority, the Port Qasim Authority, the Karachi Port Trust and the Malir Development Authority. He added that efforts are being made to have the lands vacated but may take a few months.

To this, CJ Jillani inquired from the officers as to what steps have been taken by their department to remove illegal occupation. Shah replied that notices have been issued by the department to encroachers, asking them to vacate the lands that they illegally occupy but added that this method has not yielded any result.

This led the bench members to observe that the issue would not be resolved unless the court summons senior members of these institutes.

Jillani then asked the revenue officers how long it would take to retrieve the state land that has been illegally encroached upon. The board of revenue officers requested for six months to secure the lands.

The apex court agreed to the six-month time period to retrieve the lands from unlawful occupation. Adjourning the hearing for a date to be later notified by the office, the bench directed the officers to submit a compliance report within the stipulated time.

Meanwhile, the Hyderabad deputy commissioner Nawaz Saho informed the judges that 146 acres of forest land was secured from land grabbers on May 4 of last year by the district municipal corporation in compliance with the apex court’s order.

The SC then directed advocate-general (AG) Abdul Fateh Malik to ensure that the Sindh Chief Minister, Qaim Ali Shah, approves the release of funds for tree plantation on the 146 acres of forest land that has been retrieved from land grabbers.

The bench also directed the relevant authorities to establish police posts in the area to ensure the encroachments do not re-emerge in the future.

These directives were issued on a petition against illegal encroachment upon forest land.

Conservator Muhammad Sadiq Mughal had submitted that the possession of the retrieved land was handed over to the forest department but the provincial government did not make any allocations to launch a tree plantation drive on the land in the 2012-13 budget.

The petitioner claimed that requests were made to the police department to set-up posts in the area so that the land is not encroached again. So far, neither funds for the plantation drive nor police posts have been provided.

Disposing of the petition, the SC directed the AG to ensure that the Sindh government releases funds for the plantation drive. Police authorities were also directed to set-up posts in the area.