Pakistan urges Kabul to refrain from taking any 'detrimental' action

Pakistan urges Kabul to refrain from taking any 'detrimental' action 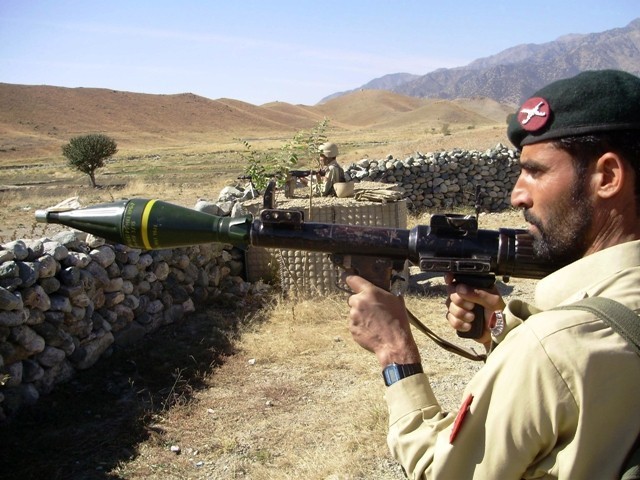 A file photo of Pakistani soldiers at the Pak-Afghan border. PHOTO: fILE

ISLAMABAD: Pakistan on Tuesday urged the Afghan government to “refrain from taking any action that may be detrimental to peace and stability on the border” at a time when security forces are fighting local and foreign militants in the North Waziristan tribal region.

The request comes a day after the Afghan foreign ministry said that it is considering a ‘fitting response‘ to the alleged killing of three soldiers and eight civilians by Pakistani troops in the eastern Kunar province.

Kabul had made the allegations at a time when Islamabad is seeking the neighbouring country’s help to enhance border security to stop militants from fleeing and entering the Afghan side of the border.

In a press release today, Pakistan rejected Afghanistan’s allegations terming them as baseless and added that Pakistani forces have been attacked frequently from the Afghan side of the border.

“It is with deep disappointment that we have seen the allegations by senior Afghan officials regarding Pakistani troops in civilian dress conducting attacks in areas of Kunar Province. We reject these baseless allegations,” Pakistan’s foreign ministry said.

“The fact is that the Pakistan armed forces have been attacked repeatedly by terrorists operating from the Afghan territory. Our armed forces have acted only in self defence, with maximum restraint and responsibility,” the press release stated.

“Pakistan is engaged in a major effort to address the scourge of terrorism. We believe the unfounded allegations from the Afghan side not only vitiate the environment but also serve to undermine the efforts for constructive engagement between the two countries,” the foreign ministry spokesperson said in the statement.

“For our part, we will neither be deterred from addressing the challenges at hand, nor from building a friendly and cooperative relationship with the people of Afghanistan,” she added.