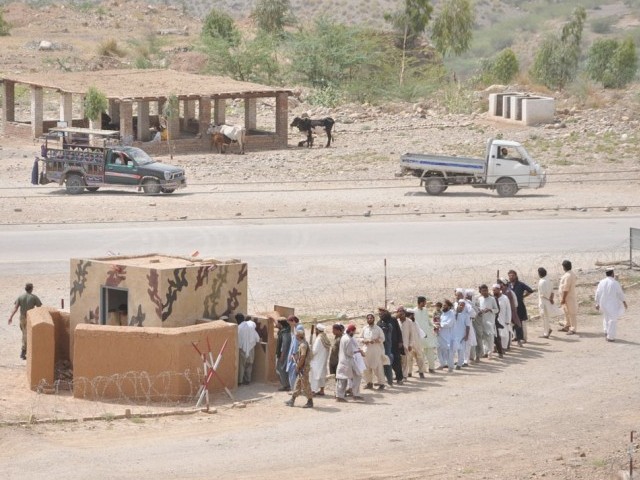 According to PTI Khyber-Pakhtunkhwa (K-P) President Azam Swati, over 181,000 people were registered at a checkpoint in Bannu. PHOTO: NNI

PESHAWAR: The provincial leadership of the Pakistan Tehreek-e-Insaf (PTI) has sought data on people displaced from North Waziristan Agency in order to facilitate the tribesmen leaving the agency due to the ongoing military operation, Zarb-e-Azb.

According to PTI Khyber-Pakhtunkhwa (K-P) President Azam Swati, over 181,000 people were registered at a checkpoint in Bannu, while 3,567 were registered at a checkpoint in DI Khan. However, relief activities are at a standstill because only 80 people have arrived at an internally displaced persons (IDP) camp set up in Bannu, Swati told The Express Tribune on Friday.

“We have ensured the provision of electricity, tents, water, doctors and medicines at the IDP camp but very few have reached there. We are now planning another strategy to reach out to the displaced persons in order to facilitate them,” Swati said.

He added the PTI has plans to set up ‘pickup points’ which the IDPs could visit to collect cash cards.

“At the moment, we do not have data about the number of displaced persons as most of them have moved to other districts in K-P and even Mianwali in Punjab. The federal government needs to immediately provide us the relevant information on displacement from the agency,” Swati demanded, adding the IDPs should be facilitated before Ramazan.

“Aside from the party’s provincial leadership, members of the Insaf Students Federation as well as district leaders are also putting in efforts to ease the problems the IDPs are facing,” said Swati.

PTI provincial spokesperson Aisha Gulalai said the authorities should extend the deadline of evacuation as hundreds of tribesmen are still stranded in the agency.

“The provincial government has released a total of Rs350 million for the displaced persons. Upon registration, Rs5,000 will be given to each IDP family, while Rs7,000 will later be given each month,” she added.

“If the federal government had taken us on board before beginning the offensive, we would have had time to prepare for the influx of people and the families would not have to suffer as they are doing now,” said Gulalai.

PTI is attempting to get the relevant data but since IDPs have been moving to several other districts as well, the party remains unable to compile holistic figures.