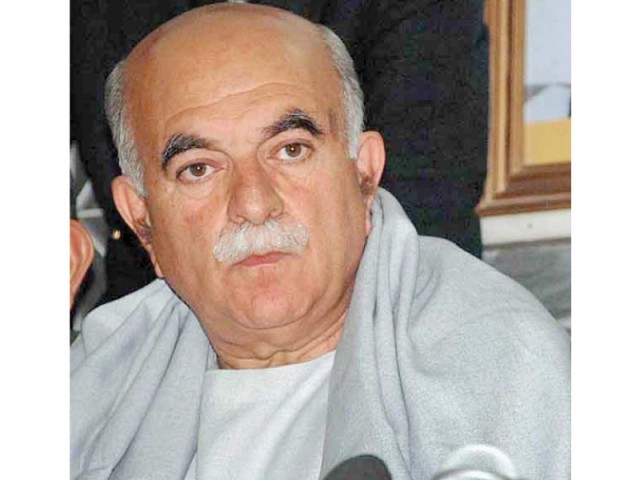 Islamabad has sought the extradition of Tehreek-e-Taliban Pakistan (TTP) chief Mullah Fazlullah from Afghanistan and the dismantlement of the militant group’s hideouts in the Kunar and Nuristan provinces, The Express Tribune has learnt.

The request for the extradition of Pakistan’s most wanted man was made by Mehmood Khan Achakzai – the chief of Pashtunkhwa Milli Awami Party (PkMAP) – on behalf of Prime Minister Nawaz Sharif in a meeting with Afghanistan’s President Hamid Karzai in Kabul on Wednesday, a well-informed government official said.

The Foreign Office (FO) confirmed Achakzai visited Afghanistan as a special envoy of the prime minister to seek Kabul’s cooperation in eliminating terrorism. He was also accompanied by Foreign Secretary Aizaz Ahmed Chaudhry.

When contacted, Achakzai refused to comment on the visit.

But the government official familiar with the development told The Express Tribune that Pakistan had requested the Karzai administration to end support for the TTP and extradite the group’s fugitive chief, who is believed to be hiding in Afghanistan.

The official, who asked to remain anonymous, said Pakistan had compelling evidence suggesting that Fazlullah and other TTP commanders were enjoying the ‘patronage’ of Afghanistan’s intelligence agency.

Afghanistan’s support is very crucial for the success of the operation in North Waziristan. They need to dismantle TTP’s sanctuaries on their soil. They must stop supporting Fazlullah,” one security official said.

According to a statement by Karzai’s office, Prime Minister spoke to the Afghan president again on Thursday and “discussed the results of talks held with the Pakistani delegation.”

“The Pakistani premier agreed that both countries should jointly fight with all terrorists. Safe havens of terrorists should be dismantled and there should be a roadmap to coordinate the joint struggle,” the statement said, adding an Afghan delegation, carrying a special letter from Karzai, would visit Islamabad soon.

President Karzai also underscored the need to coordinate with the anti-terror war strategy with all key regional players, the statement said, adding: “the Afghan President also called for extra care to avoid civilian casualties during the war on terror.”

It is not clear, however, whether this means the Karzai administration is willing to extradite Fazlullah and destroy TTP hideouts in Afghanistan.

It is believed the Afghan intelligence agency is providing refuge to TTP as a bargaining chip with regards to Pakistan on the issue of Afghan Taliban and the Haqqani network, which allegedly has safe havens in Waziristan.

Pakistani authorities have assured Afghanistan that all militants, including the Haqqanis, will be targeted in the ongoing Operation Zarb-e-Azb. Army chief General Raheel Sharif has publicly directed security forces to eliminate all terrorists and their sanctuaries without any discrimination.

Pakistani embassy sources earlier said only Foreign Secretary Aizaz Chaudhry had met Karzai in Kabul. However, the FO later revealed Achakzai too visited Kabul from June 17 to 18 as a special envoy of the prime minister.

The PkMAP chief was sent after Prime Minister Nawaz spoke to the Afghan president on Monday and said he would send a special envoy to discuss the enhancing of border security for the operation in Waziristan.