Zarb-e-Azb: Sindh to seek help from UNHCR to register IDPs

Zarb-e-Azb: Sindh to seek help from UNHCR to register IDPs 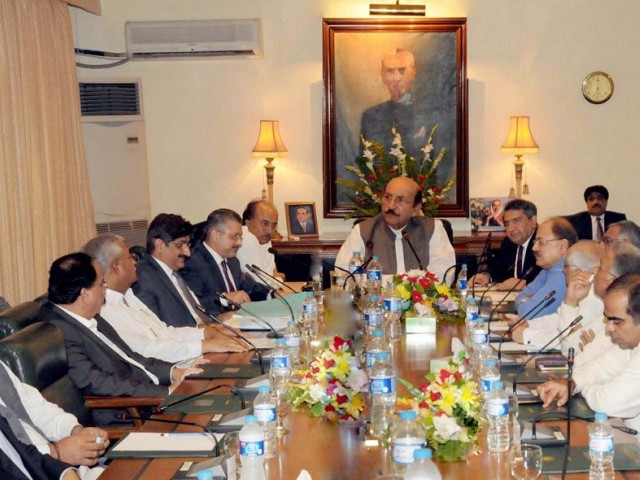 KARACHI: The Sindh government has decided to approach the UN refuge agency, UNHCR for registering people fleeing the military operation in North Waziristan.

The decision was taken in a meeting of the Sindh cabinet on Wednesday.

Sources privy to the developments in the meeting told The Express Tribune that the government will seek the UN agency’s technical help so that people coming from the troubled areas can easily be registered and repatriated to their areas.

The meeting, which was chaired by Chief Minister Syed Qaim Ali Shah, was informed that help will be sought from the NADRA to identify the nationality of the commuters. “As such all commuters travelling from other parts of the country have been advised to keep CNIC with them,” the spokesperson for CM House said while referring to the decision.

Expecting retaliation by the militants and their associate groups in the province, has directed LEAs to prepare contingency plans and an integrated security strategy for Karachi and other parts of Sindh to deal with reprisal attacks.

The cabinet decided to ensure close liaison between all law enforcement agencies including the Army to ensure prompt and systematic actions against criminals. It was decided to sensitise other stake holders, organisations, management of the vital public and private installations to beef up their internal and external security addition to support LEAs.

Officials briefed the meeting about check posts at all exit and entry points on the Sindh border. These would be jointly monitored by Rangers and Sindh police to stop aliens and criminals from entering the province.

“Strict checking would be carried out at these check posts, so that no criminal could take the advantage and hide himself in the shape of IDPS,” the handout issued by CM House said.

The cabinet made the decision to establish help line with a telephone number to get the information about suspected, terrorist’s activities from the public.

The cabinet decided to sanction recommendation for Inspector General of Sindh Police, DIG Munir Shaikh, SSP Pir Muhammad Shah for the highest police medal for their bravery in fighting terrorists during the Karachi Airport attack.

Addressing the meeting CM Sindh Syed Qaim Ali directed the IG Police to expedite the training to newly recruited forces and complete it shortest possible time. He asked the officials of police and law enforcement agencies to put strict vigilance over the shanties and slums specially those which are nearest to the vital installations.

The IG Sindh Police Iqbal Mehmood and Home Secretary Dr Niaz Abbasi briefed the cabinet about the overall performance of targeted operation and new strategy to combat with any eventuality of retaliation by the terrorist here at Karachi.

The home secretary said that all the commissioners have been directed to prepare list of vital installations in their areas and identify security threats to the important places and ensure thief safety.