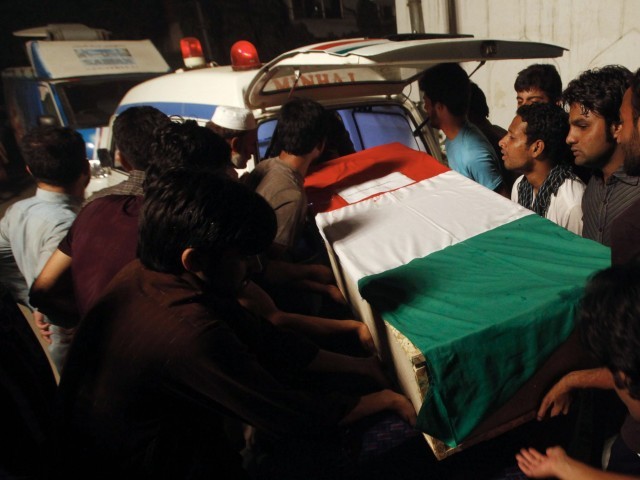 A coffin bearing a slain supporter of Tahirul-Qadri, killed during clashes with police, is shifted into an ambulance during a funeral ceremony in Lahore. PHOTO: AFP

LAHORE: Lahore police and Establishment Division officers have tampered with the medical reports of those injured in clashes between Tahirul Qadri supporters and police on June 17, Express News reported on Wednesday.

According to sources, doctors are being pressurised to change the medical reports of those with bullet injuries to those of physical violence.

An officer of the Establishment Division from Islamabad arrived in Lahore today and was seen pressurising the medical superintendent of Jinnah Hospital to change the reports of those admitted after the clashes erupted.

The Establishment Division official said that he was visiting a patient. However, along with  DSP Aftab and suspended SP Model Town division Tariq Aziz, he had taken over the medical superintendent’s office.

Doctors, requesting anonymity, confirmed to Express News that they were asked by police to add names of police personnel injured in the incident as well. However, they said there was no police personnel currently admitted in the hospital, as they had been discharged at night.

Furthermore, police stopped doctors from treating the 51 injured and did not allow them to take their rounds in the ward.

However, while speaking to Express News, medical superintendent of Jinnah Hospital Dr Abdul Rauf said that he was not present in his office when police officials came to the hospital. He went on to add that injured police officials came for a medical check-up and special care is being provided to the injured.

Punjab Chief Minister Shahbaz Sharif, while taking notice of this incident, asked health secretary and police officials for a report on the alleged tampering.

Speaking to Express News, Punjab Law Minister Rana Sanaullah said records of the injured cannot be tampered with and police went to collect the records as evidence for the case.

He further added that Gullu Butt, who is responsible for smashing windscreens and windows of vehicles during the clash, is not a member of the Pakistan Muslim League- Nawaz (PML-N) as claimed.

Later in an interview on Express News, Qadri expressed gratitude to the media for exposing the “barbaric act of state terrorism” that was carried out. He further said that he does not have faith in the judicial commission and the number of those killed in the incident has risen to 11. Express News screengrab of a policeman caught in the act.