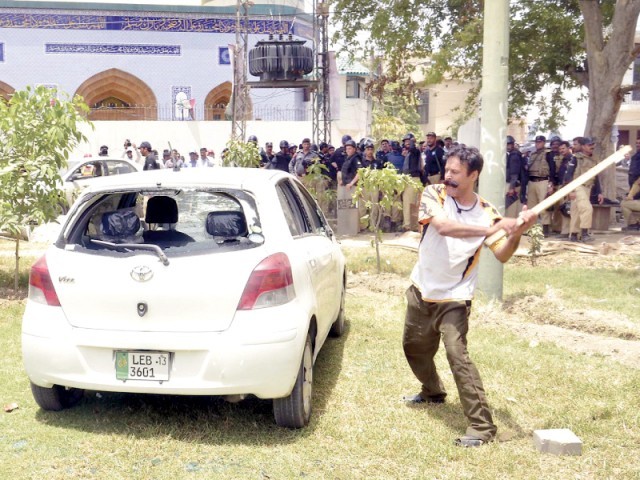 Gullu Butt breaks windows of a car during the clash between police and PAT workers. PHOTO: INP

LAHORE: The man, who smashed windscreens and windows of vehicles outside the Minhajul Quran International Secretariat in Lahore in the presence of security officers, surrendered to the police on Wednesday, Express News reported.

Gullu Butt, a resident of Faisal Town, started vandalising private vehicles with a club when the clash broke out between activists of Pakistan Awami Tehreek (PAT) and policemen on June 17, which had left as many as eight party workers, including two women, dead and 85 others injured.

Butt is also allegedly an active member of the ruling Pakistan Muslim League – Nawaz (PML-N). Two cases were registered against the vandal at the Faisal Town police station.

Television footage had shown Butt arriving at the scene on a motorcycle. He was brandishing a club and chanting slogans. No police official had tried to stop him and the vandalism continued unabated. It was learnt that a VIP calls him Sher-e-Punjab (Lion of Punjab).

Butt had supplied water and cold drinks to the police officials throughout the operation. However, he quickly disappeared after the operation.