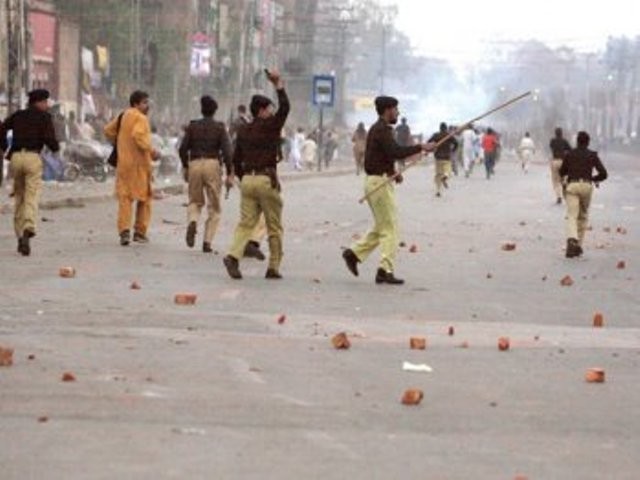 An Express News screengrab of police trying to disperse the protesters.

Son of Dr Tahirul Qadri, Dr Hussain Mohiudin Qadri is nominated as the main suspect in the three-page FIR, which was registered on the complaint of SHO Faisal Town Rizwan Qadir. Sections of murder, attempted murder and terrorism have been included in the FIR.

Earlier today (Wednesday), Prime Minister Nawaz Sharif expressed sorrow over the deaths of the PAT activists who were killed in the mayhem.

The clash, which took place outside the Minhajul Quran International Secretariat, had left as many as eight party workers including two women dead and 85 others injured.

Express News Islamabad bureau chief Amir Ilyas Rana reported that the premier has formed a judicial commission to find out those responsible for the Lahore incident.

Nawaz said that those responsible will be held accountable for their actions.

Taking notice of the Lahore clash, Punjab Chief Minister Shahbaz Sharif has called a cabinet meeting to discuss the incident.

Following the pitched battles in the streets, Shahbaz had ordered a judicial inquiry and offered to step down if found responsible for the bloodshed outside the Minhajul Quran International Secretariat.

Punjab Law Minister Rana Sanaullah, while speaking to media in Lahore, said the demolition of barriers was a routine anti-encroachment exercise and that certain elements twisted the event into a political clash.

“This is why we have established inquiry committees; those responsible will be punished by law,” he said, further accusing PAT leaders of provoking their supporters to violence. The provincial law minister said statements issued by Qadri and his party leaders intensified the situation. “I extend my sympathies and condolences to those who were provoked by their leaders and were injured in the clash,” he said.

Sanaullah called on Qadri to accept the state, the law and current political realities and not create difference among the people. “If Dr Qadri wants change, he should come here and win the public’s mandate but he cannot impose his agenda by force,” the Punjab law minister said.

He lashed out at critics who were accusing Punjab government of delaying investigation into the incident. “Those who are saying we are using delaying tactics are questioning the integrity our judiciary; the judges working on this case are independent and they don’t take orders from anyone.

Leader of Opposition in the Punjab Assembly Pakistan Tehreek-e-Insaf’s Mian Mehmood-ur-Rasheed, while speaking to the media outside the provincial assembly on Wednesday, demanded the resignation of the Punjab chief minister as well as that of the Punjab law minister. Express News screengrab of Leader of Opposition in the Punjab Assembly Pakistan Tehreek-e-Insaf’s Mian Mehmood-ur-Rasheed speaking to the media outside the provincial assembly.

Rasheed added that the judicial commission, which will investigate the mayhem in Lahore, was “a joke.”

Expressing similar sentiments to that of Rasheed, Pakistan Muslim League-Quaid (PML-Q) chief Chaudhry Shujaat Hussain, while speaking to the media in Lahore, remarked that no one will accept the judicial commission formed to investigate into the Lahore clash.

Jamiat Ulema-e-Islam-Fazl (JUI-F) chief Maulana Fazlur Rehman, standing next to Hussain, also criticised the Punjab government for not taking strict actions regarding the bloodshed in Lahore, adding that the provincial government was trying to cover it up.

He added that the country is not capable of handling such incidents.

“The clash in Lahore is a sad incident,” Rehman said, expressing condolences to the families of the victims of the brutal encounter between the PAT workers and the police.

He also stated that those responsible for the mayhem should be punished.

The opposition in the Punjab Assembly boycotted the session of the provincial assembly today (Wednesday).

The reason behind the boycott was reportedly that they were not being allowed to discuss the clash in Lahore. Express News screengrab of opposition members in the Punjab Assembly chanting slogans outside the assembly.

At the stairs outside the assembly, opposition members chanted slogans against the Punjab government as well as the Lahore police.

The funeral of six of the eight people who were killed in the clash between PAT workers and the police was held at the Minhajul Quran International Secretariat late on Tuesday.

Express News screengrab of the funeral.

Hundreds of PAT workers as well as members of religious parties were present at the funeral.