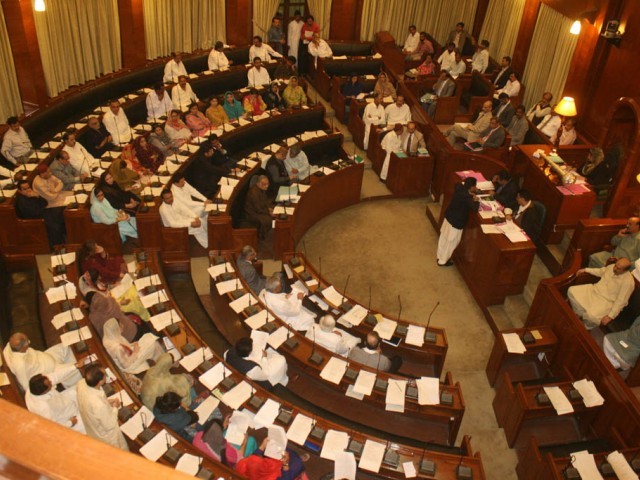 The first person to speak from the treasury benches was MQM’s Khalid Iftikhar. PHOTO: IRFAN ALI/EXPRESS/FILE

Calling the Sindh government ‘visionless’, ‘leaderless’ and ‘directionless’, its lawmakers demanded an audit of the Rangers funds during the assembly session on Tuesday.

The demand was initially made by Pakistan Muslim League-Functional MPA Mehtab Akbar Rashdi, but the other opposition members endorsed her views by thumping their desks. The session started with speaker Agha Siraj Durrani in chair at around 11:40am. The lawmakers wanted to question the performance of the law enforcement agencies as the Sindh government increased their budget by 20 per cent.

“Every year, we keep more money and lucrative incentives for the border security force and the police but their output fails to show that,” said Rashdi. “Can we make them accountable?”

Rashdi, a bureaucrat-turned politician, referred to the worsening law and order in the province and the recent attack on Karachi airport. “The attack on our important installations shows how vulnerable and insecure we are even after having resources,” she claimed. “This is all being done because government is leaderless, visionless and pointless.”

On the government’s focus on service delivery in the next financial year, Rashdi said, “Service delivery is a dream that cannot be realised without proper planning and political will, which unfortunately the Pakistan Peoples Party (PPP) government lacks.” She also criticised the government for failing to control ‘copy’ culture. More than 40,000 jobs are being created in the province to sell them for a certain amount of money, not to appoint people on merit, she claimed. She felt Rs5 billion for universities was not sufficient. “I will suggest transferring Rs10 billion from the non-development expenditure of the education budget to universities.”

Meanwhile, PPP’s Khursheed Junejo appreciated his government’s efforts to allocate around Rs22 billion for the energy sector and launching wind energy and other projects. He did, however, demand the government develop the infrastructure of Sindh. “There are 10 police stations in my constituency in Larkana but six of them have no buildings,” he pointed out. “The same situation prevails in the education sector where students get the education under the shadow of trees.”  Bilqees Mukhtiar of the Muttahida Qaumi Movement lashed out at the provincial government for not approving drinking water scheme that she proposed for Tharparkar district. She also criticised the new taxes on laundries, motorcycles and car wash, and insisted that an agriculture tax be imposed. The education boards fall under the control of the chief minister, whom no one holds accountable, she said, demanding the boards be handed over to the education department.

Earlier on a point-of-order, the opposition members wanted to know why they were not taken into confidence over the law and order situation and the decisions made about the Waziristan operation.

“We are elected representatives,” said Pakistan Muslim League-Nawaz’s Irfanullah Marwat. “Secret meetings are convened by the government and we don’t know what is being cooked behind the scenes.”

Durrani assured him that the chief minister will contact them soon and take them into confidence.

The arrival of former prime minister Yousuf Raza Gilani in the Sindh Assembly on Tuesday took up most of the time in the budget session. The Pakistan Peoples Party (PPP) members not only gave a standing ovation to their senior leader who was sitting in the Governor’s Gallery, but also demanded the judiciary revisit the cases against him.

“After Benazir Bhutto, Gilani sahib is the second former premier to witness the assembly proceedings,” pointed out PPP senior minister Nisar Ahmed Khuhro, adding that people should learn lesson from Gilani, who appeared patiently before the apex court and honoured the court’s decisions. Despite the kidnapping of his son, Gilani has not succumbed to anti-democratic forces, he added. Gilani was in the city for his bail plea at an anti-corruption court and decided to drop into SA.